Art of the Inferno

The Art of the Inferno (火炎龍の術, Kaen Ryu no Jutsu; "Art of Flame Dragon") is a recurring ninpo art used by Ryu Hayabusa. It can be bought from Muramasa in Ninja Gaiden, while he gives it to Ryu in chapter 2 of Ninja Gaiden: Dragon Sword. In Ninja Gaiden 2, it is found in chapter 1 inside a chest within a shrine after the first few parts of the chapter. If not found, like the other items, it can be bought later from Muramasa. It is also used by Ryu Hayabusa in Warriors Orochi 3.

Allows Ryu to control fire at will, first enveloping him in flames and then shooting a fireball in front of him.

A Ninpo that converts the caster's Ki into crimson flames.

This ninpo uses the power of telekinesis to hurl a flaming mass of pyrokinetic energy at a desired target.
The Art of the Inferno is highly effective against enemies in front of the caster. Those unlucky enough to fall victim to this ninpo are completely engulfed in flame. The fire it unleashes is no ordinary flame; akin to the flame of a Dragon’s breath, it is no surprise that records fail to mention anyone surviving the intense heat of the Inferno.

Within the Muramasa's shop in Tairon are many antiques, weapons, and ancient scrolls. Ryu Hayabusa bought one of these scrolls, the Art of the Inferno. Learning the basic style of this art, Ryu would envelope himself in pyrokinetic flames generated from his Ki and blast it all straight in front of him.

Using it in his mission to retrieve the Dark Dragon Blade, Ryu incinerated many enemies and eventually mastered it, resulting in larger and hotter flames.

Upon returning from the forest, Ryu finds his village under attack by the Black Spider clan. Fighting his way through the village, Ryu encounters Muramasa, who had been visiting Kureha's grave before being ambushed. Muramasa gives Ryu a scroll containing an advanced Art of the Inferno style. Quickly learning the art, Ryu created a large ball of pyrokinetic flames and moved it around the area with his mind, making short work of the Black Spider Ninja surrounding him and Muramasa.

While he charred many enemies to death with this art during his journey to save Momiji, he also used it to light flames and destroy the spider steel silk barriers of the Black Spider clan.

Having been informed by Momiji of the Black Spider Ninja clan's intentions, Ryu finds himself once more fighting the Black Spider ninja, this time in Sky City Tokyo. After taking out the first few waves, Ryu comes across a shinto shrine and opens a chest within it. Inside the chest Ryu discovers a scroll containing an advance dragon breath style of his basic Art of the Inferno. This Art of the Inferno enabled Ryu to replicate the legendary flames from a dragon's breath, a flame hotter than any other type of fire.

After quickly learning the art, Ryu used it many times as he fought the deadly alliance between the Black Spider Ninja Clan and the Fiends, causing them all to die screaming in a burning agony. As Ryu progressed in his mission, he would also master this art, enabling him to simultaneously shoot 3 dragon flames at 3 different locations each time he performed it.

The Art of the Inferno is a powerful attack with focused potency. Though lacking in radius, it does have an area damage at the point of impact, damaging multiple enemies caught within this impact radius.

It is best used in "bottle neck" areas, such as hallways and enclosed areas where it is hard for enemies to spread out and attack from different flanks.

When solving puzzles, it is used to burn down the Black Spider Ninja clan's steel silk barriers, as well as lighting torches and candles.

Incinerating werewolves with the intense heat of dragon flame.

Ryu charges up the Art of Inferno.

The True form of the Art of the Inferno in NG3/Razor's Edge, called "Art of the True Inferno" 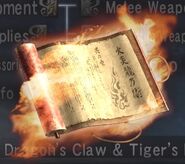 NGS1 Art of The Inferno
Community content is available under CC-BY-SA unless otherwise noted.
Advertisement