Ninja Gaiden Wiki
Register
Don't have an account?
Sign In
Advertisement
in: Characters, Enemies, The Tribesmen of the World of Chaos,
and 3 more

Ashtar the Emperor of Darkness (兇魔天帝 アシュター Kyōma Tentei Ashutā, lit. Cruel Demon God Emperor Ashtar) is the one of the two main antagonists in Ninja Gaiden II: The Dark Sword of Chaos, and the self-proclaimed "Emperor of Darkness."

Ashtar is well over six feet tall, and dressed in bulky body armor. A cape is draped over his shoulders. His face is concealed by his helmet which has three spiky horns protruding from the top and both sides of the head, also his mask itself appears to be crying tears of blood.

Ashtar commands a dark warrior of Tribesmen from the World of Chaos.

He commands a variety of magic powers, such as the ability to fly, teleport, and throw fireballs.

His primary weapon is the Chaosium Sword, or the Dark Sword of Chaos, which according to U.S. operative Robert T. Sturgeon, was grown from the bone of the Demon, thus making it the diametric opposite of Ryu's Dragon Sword, which was grown from the fang of the Dragon.

"Chaosium" would describe what the sword is made of, and "Dark" describes the nature of the sword (evil).

In this relation to the 'Dragon Sword', an appropriate short name for the weapon would be the Demon Sword.

Ashtar is a shogun warrior of an unknown age. He has risen through the ranks of the Chaos realm. He has evidenced many sorcerous powers. These may come from the Demon Sword he wields, or he may simply use the Demon Sword to amplify any existing sorcerous abilities.

Thousands of years ago, Ashtar was present during the creation of the Dragon Sword. He was also there when the Dark Sword of Chaos was created as well.

Ashtar was also present, but was hiding in the shadows during the climatic battle between Ryu Hayabusa, son of Jô Hayabusa and against the former head of the Demon Clan, Guardia de Mieux (the Jaquio) in the first Ninja Gaiden. When Jaquio was defeated, Ashtar delayed his plans and continued to monitor Ryu Hayabusa and Irene Lew.

During this time, he amasses an army that will help him in his quest to open the Gate of Darkness, to unleash the powers of the demon tribe he ruled within the Chaos Dimension upon the world. While has many agents, three lieutenants of note were stationed on earth who Ryu encountered. They give an insight to the power of Ashtar's research.

While operating on earth, Ashtar's true sanctum was in his Chaos Realm, only accessible by a portal he could create. He kept many of his strongest monsters there.

Shortly after the Jaquio's defeat, a foot solder arrives and reports to Ashtar of the Jaquio's demise. Ashtar is not that surprised and asks about Ryu. When the henchman replies that Ryu "knows nothing," Ashtar orders him to "continue the plan," and that for the time being, Ryu is to be left alone.

He then goes on that once the Gate of Dakness is opened, all men will kneel before him, and claim Ashtar as their new master. He kidnaps Ryu's girlfriend, the C.I.A. operative Irene Lew, forcing Ryu into action. It is after Ryu defeats Funky Dynamite inside the Tower of Lahja that Ashtar makes his appearance, with Irene as his hostage.

The Dark Emperor stuns the Ninja Dragon with an energy blast from his sword. After a moment taunting the downed Ryu, rhetorically doubting that Ryu could have defeated his predecessor, the Jaquio, Ashtar raises his sword to deliver the deathblow, but Robert steps in, firing at Ashtar, causing him to hesitate.

Ignoring Robert's demands to lower his weapon, Ashtar retreats with Irene, saying that "if you want the Sword, you'll have to follow me...into the Maze of Darkness." Ryu gives chase. Robert follows him and helps him by holding off a pair of gargoyles.

After Ryu defeats the underground water dragon, Naga Sotuva, Ashtar appears to Ryu, taunting him, telling him to either fight him or Irene dies. While Ryu makes his way though the icefields, Ashtar recites the legend to himself: "To the one who releases Darkness with the immortal blood, he shall receive the Power of the Almighty Evil. The legend shall come true. This earth shall fall into shadow and the demons of evil shall rule forever."

Ryu then encounters Ashtar, who hands Irene over to him without a fight. This move is a distraction, as Ashtar stabs Irene in the back severely wounding her. He also gets the drop on Robert, firing another energy beam, this one hitting its mark. Ryu orders Robert to look after the injured Irene as he faces off against Ashtar, who tells him that his sword can't harm him, now that it is filled with hatred.

Regardless, The Ninja Dragon and the Dark Emperor fight. Ashtar uses the energy blasts he had demonstrated previously along with an ability to hover in the air, teleport, and shoot out a circle of flame to attack Ryu. Ryu manages to defeat Ashtar, having apparently overcome his rage in the battle.

With what seems to be his dying breath, Ashtar sends the sword away before succumbing to his injuries. 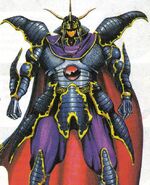 Ashtar in Ninja Gaiden II: The Dark Sword of Chaos for NES

Ashtar and his sword