Ayane is a slender, petite, young woman who has short, purple hair and striking red eyes. Whilst looking more childlike and youthful in the first Ninja Gaiden title, she appears more mature and feminine in Ninja Gaiden II and Ninja Gaiden 3: Razor's Edge, along with a more voluptuous body on par with Rachel in the latter two titles.

Ayane's governing color in her attires is violet, as revealed in the Ninja Gaiden series; she wears a whole body jumpsuit in silver and violet with flower decorations along with several pieces of armor and garb. In Ninja Gaiden Sigma 2, she opts for a more revealing costume, a dark top with a butterfly ornament on her left breast, a striped mini skirt in purple, some high-heeled sandals and gloves, with a pinkish obi tied on her back, resembling a butterfly's wings. The overall design has a butterfly motif.

In Ninja Gaiden 3: Razor's edge, Ayane wears a modified version of her default leather costume from Dead or Alive 5 with the Fuma Kodachi being carried on the side of her thighs and butterfly wings on her back.

Ayane's favorite accessory is the violet bandanna which she always wear on her head in both Dead or Alive and Ninja Gaiden series.

Ayane is rather very quiet, slightly distant and appears to admire Ryu Hayabusa, whom she refers to as "Master Ryu" out of respect for both him and his rank. Most of the time she is cold and has an arrogant attitude, especially to those she views as "beneath" her. However, in extreme situations, this hard outer shell is broken, exposing her soft, vulnerable, and emotional side. Sometimes she is also cynical and sharp. Ayane is very intelligent and quick on her feet.

As a result of being conceived when Ayame (wife of Shiden, leader of the Mugen Tenshin clan) was raped by Raidou, Ayane spent much of her childhood an outcast and unwanted by the majority of her clan. Taking pity on Ayane, Genra, the leader of the Hajin Mon sect adopted her, becoming Ayane's foster father. With permission of the Mugen Tenshin clan's Master and Head Ninja Shiden, Genra inducted Ayane into the black ops branch of the clan known as Hajin Mon, training her in Hajin Mon style Ninjutsu in order to assist him in his duties. Unlike the main Tenjin Mon sect that deals with direct combat, the Hajin Mon specializes in behind the scenes support role and training mage ninja in ninpo abilities.

At age 14 [citation needed], Ayane, for circumstances still unknown, came under the employment of Murai, a rogue ninja and former member of the Hayabusa Ninja Clan.

As Murai's agent, Ayane is tasked with gathering information and spying for her Master. When Ryu Hayabusa enters the domain of Murai's Ninja Fortress, Ayane becomes Murai's messenger, relaying messages to Ryu via Kunai scrolls. Noticing the nearby Hayabusa village ablaze, Ayane rushes in to inform her Master Murai, finding him and in mid conversation with Master Ryu, to her surprise. As Ryu heads off to rescue his clan, Ayane is sent by Murai to investigate the carnage. In the Hayabusa Village, Ayane encounters Samurai warriors and spots their leader Doku. However, she is overwhelmed and only escapes within an inch of her life. Ryu later finds her on the top floor of an armory, where she could only warn him about a "Samurai clad in dark armor" before losing consciousness.

Months later, Ayane is sent to Tairon, shadowing Ryu as he searches for the Dark Dragon Blade on his quest for vengeance. Under orders by Murai to manipulate Ryu Hayabusa into going on a massacring spree, Ayane works as Ryu's secret agent, relaying various intel to Ryu via Kunai Scrolls. When they meet, Ryu mockingly asserts Ayane as "running errands for Murai", after which he asks Ayane to take care of Rachel still recovering from the Hydracubus. As events unfold, Ayane watches from behind the scenes. Switching sides in the end, she only observes as Ryu Hayabusa cuts down her former Master.

When Ryu arrives at the Rub' al Khali desert with Mizuki McCloud, Ayane is sent by Hayate to give the Jinran-Maru to Ryu to use as a weapon, since his Dragon Sword was inside of him due to Grip of Murder inflicted on him by the Regent of the Mask. Ayane asks Ryu to bring it back in one piece because it was only a loaner, and tells him to let someone in his village look at his arm soon before she leaves.

Later in Paris, Ayane was "taking it easy" on her vacation. However, LOA terrorists shortly arrived in the area, as was hinted to Ayane by her cell phone which received a text saying "5 seconds." While Ayane was being given a massage, a terrorist came in her room causing the masseuse to flee in fear. Ayane nonchalantly stood up, wrapped in only a towel, and was then held at gunpoint, though she showed no concern. The terrorist then attempted to pull down Ayane's towel with his gun, and Ayane killed him in an instant. More terrorists then barged into the room, and Ayane, after putting on her ninja clothing, proceeded to kill all of them. Ayane then leaps out of the building where more terrorists appear. She continued, through the rest of the city, killing them. It appears that Irene has contact to Ayane through use of an earpiece, where the two sometimes exchanged words. After making her way to the French capital building, a battle between Ayane and three LOA alchemists ensued, with Ayane soundly defeating. However, it appears that some missiles had been launched and were heading towards Ayane. Before they impacted, Ayane, in panic, calls for Irene, who managed to destroy the missiles. Ayane is fairly annoyed after learning that Irene had the missiles destruction code all along and was about to depart. However, Irene asked that she continue to help find out who these people really are. Irene stated that Ayane was the only one she could count on, especially since Ryu is not in the best of condition; being cursed with the Grip of Murder. Ayane obliges and tells Irene that she can use her for a little longer.

Ayane is then called to infiltrate a carrier owned by LOA, known as the Black Narwhal. She kills her way through, and onto the carrier, where she fights off mutated creatures, likely created by LOA. After defeating them, the carrier begins to submerge, and Irene calls Ayane to back out. However, she appears to stands there, doing nothing even when Irene urges her to get away. Irene, looking at her GPS tracker, thinks that Ayane is going down with the carrier, runs out and looks at the submerging carrier with extreme concern. Ayane then appears behind Irene and the flashback shows that she takes out her earpiece and throws it down inside the carrier as it goes down. Ayane then asks if Irene actually cares about the well being of the ninjas, or just want to keep them in check - the earpiece is also a GPS transmitter, thus showing Ayane's location. Irene states that the CIA feels that Ayane and Ryu are not enemies, nor allies, but ninjas, and are too dangerous to let alone. Ayane then replies nonchalantly that Irene and the CIA will then have to just "keep chasing the rest of us" which Irene replies "Sorry, Ryu is the only one I'm after." Ayane becomes annoyed and bursts out, "Seriously, what's with you and Ryu?!" in which Irene replies "I know him better than you do, kid."

Appearances in Other Media[]

In the film DOA: Dead or Alive, loosely based on the video game series, Ayane is portrayed by Natassia Malthe and therefore appears much older than her 16 year old self. Instead, she is the lover of Hayate and has no blood relation to him or Kasumi. She is assigned the task of killing Kasumi for abandoning the village and, as a result, follows her to the DOA tournament, where she finds Hayate alive. She then realized that Kasumi was right about Hayate still being alive. At the end of the movie, she and Hayate exchange a kiss. Her character was portrayed similar to herself in the video game series, in the sense that they are both somewhat cold and focused on their objective.

Ayane also appeared in Monty Oum's fan series Dead Fantasy. She wielded a two sided beam staff which proved to be powerful. Her enemy, Rikku of Final Fantasy X, was her main challenge in the battle. Rikku vs. Ayane is in the predicted Dead Fantasy VI.

Ayane appears as a guest character in the PS3 version of Dynasty Warriors: Strikeforce. When players clear certain missions, they can unlock her Fuma Kodachi for use. Ayane also appears in Warriors Orochi 3 representing Dead or Alive, although she wears her outfit from Ninja Gaiden Sigma 2. Ayane is pulled into Orochi's world after the events of Dead or Alive 4. 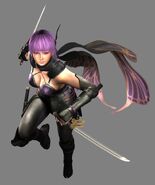 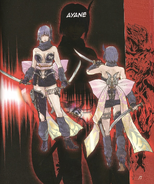 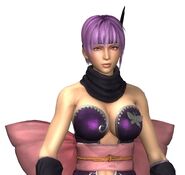 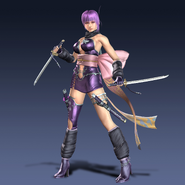 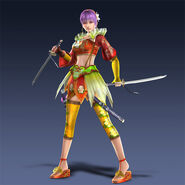 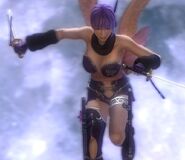