Blades of the Ouroboros

The Blades of the Ouroboros (魔導: ウロボロスの刃, Madou: Uroborosu no Yaiba; "Sorcery: Blade of Uroboros") is a magic spell used by Rachel in Ninja Gaiden Sigma. It is found in Chapter 8 after defeating the fiends at the Drawbridge Square.

This spell fuses the powers of flame & lightning to create rays of light that cut through enemies like blades.

While searching for her younger twin sister Alma, Rachel is ambushed by 4 Galla fiends at Drawbridge Square after crossing the bridge. She kills the gallas with incredible strength from her fiendish bloodline. Upon where they laid dead she discovers a sorcery jewel. The jewel granted her a magical ability known as the Blades of the Ouroboros. With the spell she is able to burst in an explosion of bladed light rays, cutting and killing enemies caught in the blast. She would use this sorcery many times in Tairon, becoming a deadly sorceress to her enemies.

This is a good overall sorcery attack, it does a good amount of damage, has a good range and most of all has an area of effect damage that will harm multiple enemies. It is best used for crowd control against groups of small enemies. 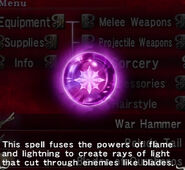 NG1-Sigma: The Blade of Ouroboros ninpo magic for Rachel
Community content is available under CC-BY-SA unless otherwise noted.
Advertisement