The Eclipse Scythe (闇月鐮刀, Ongetsu Rentou?, Dark Moon Scythe) is the strongest weapon in terms of power, aside from the True Dragon Sword. It also has the largest swing arc and second-largest area of effect, behind the Kusari-Gama. The Scythe easily cuts through hordes of enemies with devastating results. It has one of the most useful Ultimate Attacks; moving wind blades across the ground. Also great partner to the obliteration moves. It is recommended to upgrade the scythe as soon as possible for better damage and move range.

The scythe is also a useful weapon for large fiends and great for incendiary shuriken blocks. It also has a flying swallow-type grip move. The Scythe is countlessly recommended for most boss fights, having the ability to do massive damage and end the battle quickly. The Eclipse Scythe is automatically picked up by Ryu when the player defeats Volf.

Note: this is quoted from the game. "This gigantic scythe has long been a prized weapon among the Lycanthrope tribe of Fiends. As it’s name suggests, its design was inspired by the natural phenomenon of the Solar Eclipse. The roots of the weapon can be traced back to an ancient sacrifice vital. When the king of an ancient Lycanthrope tribe was overthrown, his body was tossed into a vat of Wootz steel, also known as Damascus steel. From this steel, the scythe was forged. After being hammered into rough but solid shape, the blade of the scythe was quenched by repeatedly plunging it into the bodies of living human beings. It is said that it took a full nine days for the scythe to cool completely. One would think that the characteristic grain pattern of Damascus steel should be visible on the scythe’s surface, but at present such a texture is nowhere to be found."

(Since Razor's Edge has every name for every input, the list here only provide the most relevant inputs per level.) 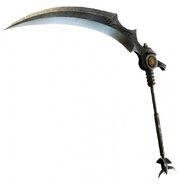 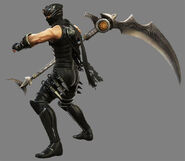 Ryu with the Eclipse Scythe in NG3 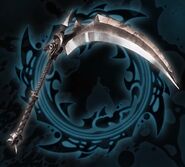 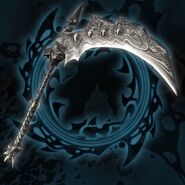 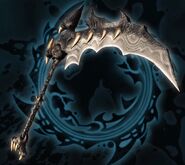