This unique weapon consists of customized gauntlets with large steel claws worn on the hands and feet. They are found in Chapter 2, inside the building that overlooks the courtyard with the Rod of Trials Shrine, just before the flight of stairs up to the Castle of the Dragon. You'll have to fight many Black Spider Ninjas once you enter this building. If you do not get them here you can later purchase them from the shop. They return in NGIII as downloadable weapons and are acquired via falcon in Razor's Edge.

This weapon is an evolved version of the hand claws, or tekko-kagi, which have been an essential part of the Ninja's arsenal since ancient times. The design of the claws embodies the immense power of birds of prey. The weapon features not only steel claws strapped to the hands, but bladed foot attachments as well. All Ninja master martial arts using hands and feet, and this weapon instantly allows them to convert their physical attacks into cutting and slashing movements. Although the claw blades themselves are short, this is more than made up for by the attachment of multiple blades to each appendage. This increases the overall cutting surface and results in devastating attack capability. Due to its savage brutality, this weapon has long been feared. In addition, because they are based on a protective gauntlet design, the claws have high defense capability, making them extremely well-rounded weapons. 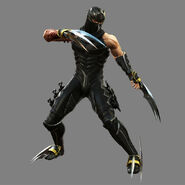 Ryu with Falcon's Talons in NG3 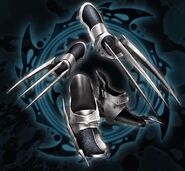 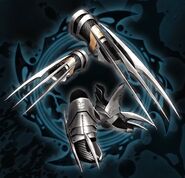 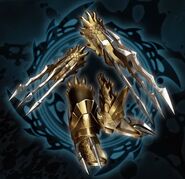