The Fiends (魔神, Majin?, Magical Race or Demons) are a collection of supernatural races descended from an evil supreme deity known as an Archfiend. The races are comprised of evil deities, demons, the undead and living monsters. They are the major antagonists in the 2004 reboot of the modern Ninja Gaiden games, and its sequels.

Before the races of Fiends, there was Vigoor, the first Archfiend, from whom all Evil Deities and Fiends arose.[1] He was eventually defeated and banished to another dimension, by the thirtheen Divine Dragons. Not completely destroyed, Vigoor would manage to hold onto existence through the jealousy and hatred of one of the Dragons.

Time passed, until in the ancient era of human history, the Evil Deities and their fiendish minions re-emerged, due to the betrayal of the 13th Dragon, who was corrupted by Vigoor and became the Dark Dragon. Unopposed, they conquered the world and the ancient human tribes. The archaic humans were impressed by their awe striking powers, idolizing and worshipping these evil deities as gods, writing them into ancient mythologies. It was in this time when the bloodlines of the ancient human tribes were mixed with the fiends, creating a new race of fiends.[2]

Due to their wicked nature, the evil deities eventually fought amongst themselves and with their armies vied for control of the world,[3] while the human inhabitants were caught up in the chaos and suffered greatly.[4] It was during this time that a new lineage of human warriors took up arms against the Fiends, they would later be known as the Dragon Lineage, who descended from the Divine Dragons themselves. With Dragon blood coursing through their veins,[5] they fought the Fiends for tens of thousands of generations until the struggle ended when members of the Dragon Lineage were able to seal away the Evil Deities and the demonic Fiends.[6] Ever since the Fiends have had a strong hatred towards the Dragon Lineage and their Dragon Ninja descendants.

The descendants of the ancient human tribes with strong blood ties to the Fiends lingered throughout the ages, mostly within the borders of the Vigoorian Empire, waiting for the day when the Fiends would rise again.

The Archfiends are evil supreme deities, each ruling a pantheon of deities and Fiends. They are in a constant power struggle with each other vying for complete control of the Fiend race and all the domains, mainly the underworld and earth.[7] The omnipotent and omniscient powers of the Archfiends are far reaching, affecting the world on a universal scale, resulting in the warping of reality, time and space. During these disastrous times vortexes fill the skies as earthly and hellish realms intertwine.[8]

The Greater Fiends are minor evil deities in a pantheon, that serve under an Archfiend. Like their masters, they are eternal and immortal, however, their powers do not extend far enough to be felt on a universal scale, but can still have devastating effects on the region they happen to occupy. Each Greater Fiend usually rules a territory with a horde of fiends at their disposal.

Humans with strong blood ties to the fiends retain their souls when turned, elevating them to the level of a Greater Fiend. Among their fellow humans they are revered as gods and goddesses.[19]

The Fiends are supernatural beings and creatures who originally descended and spawned from the original Archfiend Vigoor. They have been recorded by ancient humans in myths, legends and folklore by cultures all over the world. Although fiends are classified by how they came into being, they can all trace their origin back to the deities who spawned them.

Fiends are divided in two categories: pure and half-blood. Pure fiends are the original fiends that descend from the Archfiends and originate from their own dimension. Half-blood fiends were once humans who transformed into a fiend because of their cursed blood; most of them are vigoorian in origin. There are also artificial fiends created by technology, by infusing the DNA of fiends into humans or animals through genetic manipulation and alchemical magic.

Demons constitute the main bulk of the fiendish horde. They originate from the demonic realms, summoned into existence by the evil deities. They all have green blood and vaporize when killed.

Unlike the demons, mutants originate from the earth and unlike the undead, these fiends are still living. Fiendish mutants were once human and animals,[28] with their soul corrupted away by the evil deities they have been transformed into supernatural monstrosities.[29] Since they are of earthly origin and living they all have red blood, and most species leave a corpse behind when killed.

These fiends were once living animals and humans. After their death they were reanimated as minions to serve their overlords.

Beasts are legendary creatures created on earth to serve their masters. Like the mutant fiends originating from earth they bleed red blood and generally leave a corpse when killed.

These are objects that have become possessed by the evil deities.

These are fiends that are the result of scientific and alchemical experiments by the Lords of Alchemy. They spill pixelated blood and have blood red auras before certain attacks. The names below are actual name listed in the Strategy Guide. 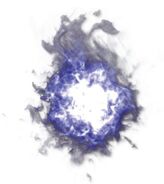 NG1: Ryu being bitten by a Shargelth 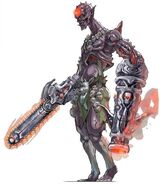 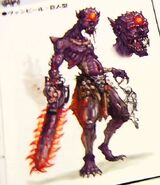 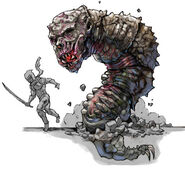 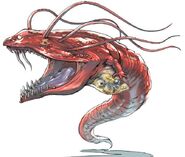