Genshin is a tall middle age man with medium build. He has an eyepatch covering his injured right eye. His outfit is a mix of traditional gi and armor, consisting of heavy tabi boots, ninja pants, fully armored upper body, armored gauntlets, ninja claw on the right arm, and a multi eyed shinobi helmet.

As Warlord of the Black Spider Clan, Genshin was the most powerful and ruthless Ninja that the clan has ever produced. Genshin's cold and calculating composure, as well as his lust for power is matched only by his hatred of the Dragon Lineage.

Despite the many atrocities he and his clan commit, Genshin was revealed to be an honorable shinobi, as everything he did, from joining the Fiends to becoming a demon himself in hopes of ending the Dragon Bloodline, he did solely for his clan's future; a sentiment his rival Ryu Hayabusa easily related to him with.

Genshin was born a member of the Black Spider Ninja Clan, and the older brother of Gamov. At some point in the aftermath of the Dark Dragon Blade Incident, he gained a hatred of the Dragon Lineage after learning that Murai, a former member of the Hayabusa Ninja Clan and connected to the Dragon Lineage through his his sister's marriage with Jô Hayabusa, killed his younger brother.[1]

At some point, he would befriend Inukoma, who was the closest thing he had to an apprentice in the clan and also a figure of admiration for the former.[2]

Leadership of the Black Spider[]

After becoming leader of the Black Spider Clan, he was approached by Elizébet with promises of power that will allow the clan to finally possess superiority over the Hayabusa Ninja Clan. Despite his hesitation and some of his own clan member's protest, he agreed into an alliance with the Greater Fiend.[3]

Genshin, Master Ninja of the Black Spider Clan, has grown weary of his clan playing second fiddle to the Hayabusa Ninja Clan, his hatred for the Dragon Lineage now reaching its peak. One day, he meets the mysteriously beautiful yet demonic Elizebet; Queen of the Greater Fiends, who promises to help him bring his clan to greatness in return for his services. Genshin hesitantly accepted, seeing this as an opportunity to destroy the Dragon Ninja once and for all.

He sends his student and Black Spider Middle Ninja, Shadow Ninja Rasetsu of the Dark Sect to Tokyo to distract Ryu Hayabusa, while he and an army of Black Spider Ninja attack the Castle of the Dragon. He duels Ryu's father Joe Hayabusa in the castle keep, defeating Joe and steals the Demon Statue, the artifact that the Hayabusa clan has guarded for millennia. Ryu bursts through the door to see his father fall through the floor. As Genshin gives Elizebet the Demon Statue, he duels Ryu and nearly kills him before Joe interferes and orders Ryu to recover the statue. He fights Joe and leaves him in critical condition before leaving.

Meanwhile, on the way to deliver the Statue to the Infernal High Priest in his sky fortress, the Daedalus, Genshin leaves the control room after watching Ryu and the C.I.A. agent Sonia damage the vessel. Genshin encounters Ryu and fights him again in the cargo hold, but their duel is inconclusive once again as the Daedalus splits in two, with Genshin on one half and Ryu and Sonia on the other.

In South America, Genshin observes the Fiends performing their blood rituals to begin reviving the Archfiend, and after Ryu defeats Elizébet he tells Ryu that the Archfiend shall resurrect himself in Japan, under the sacred peak of Mt. Fuji, and that there is where Ryu will die before taking his leave to await for Ryu at the ancestral site of both their clans.

When Ryu arrives sometime later, Genshin fights Ryu at the top of the erupting summit for the final time, but is killed. After Ryu has departed for the interior of the mountain, Elizébet appears and transforms the Ninja Overlord into a Greater Fiend.

With this newly obtained, incredible power, Genshin follows Ryu into the depths of the Netherworld and challenges him again, but in his transformed state he is little more than a raging beast. Despite the demonic power that Elizébet had given him, Genshin is defeated by the Dragon Ninja, his cursed body slain by the awakened True Dragon Sword. With his dying breath, Genshin regains himself and he tells Ryu that he has no regrets for what he's done, just as Ryu fought to uphold the Dragon Ninja legacy of justice, Genshin fought for the future of his clan. Acknowledging Ryu as a true Ninja, he gives him his cursed sword, the Blade of the Archfiend and dies, his soul redeemed.

Elizébet chastises the dead Ninja for losing for the sake of his clan's honor. Enraged by this disrespect towards the Ninja Overlord, Ryu kills her with the Dragon Sword and the Blade of the Archfiend and would use Genshin's blade with his own in his final battles with the infernal priest, Dagra Dai, and the reawakened Archfiend, Vazdah. Once the battle was finally over, Ryu would impale the Blade of the Archfiend in the ground to serve as a gravestone to Genshin in the Black Spider Ninja Graveyard at the summit of Mt. Fuji.

Genshin makes a small but significant appearance in Ninja Gaiden 3.

On the fifth day, Ryu returns to his village, but before this, he arrives at the summit of Mount Fuji, and heads for where he left Genshin's Blade of the Archfiend. Recalling his past encounter with the Ninja Overlord, Ryu draws the blade and takes it up once more, asking to use the Lord of the Dark Ninja's soul this one time, in place of his lost Dragon Sword.

On the seventh day, after Canna transforms into the Goddess and Ryu is left for dead in the ocean, the spirit of Black Spider Ninja leader appears before Ryu in a dream, once more handing over the Blade of the Archfiend to the Dragon Ninja with an approving smile, this act reawaking the soul of the Blade of the Archfiend, restoring its true power to use in the coming battle against The Goddess.

Genshin is hailed as one of the two people (other being Ryu Hayabusa) to have gained the title of Super Ninja, a title meant only for exceptional ninja whom managed to attain powerful Ninpo and a mastery in archery, martial arts, and swordplay.[4] Wielder of the Blade of the Archfiend, Genshin is also recognized among the clan as the most ruthless and powerful of the Black Spider Ninja Clan.[5] 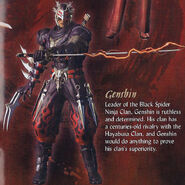 Genshin as he appears in Ninja Gaiden 3