Ninja Gaiden Wiki
Register
Don't have an account?
Sign In
Advertisement
in: Articles with empty sections, Weapons, Intact,
and 2 more

The Inferno Hammer is the enhanced version of the War Hammer in Ninja Gaiden Sigma 2. It's as strong as the Eclipse Scythe but slightly quicker. It is also the only melee weapon that Rachel uses.

Rachel's favorite warhammer, massive and powerful. It was fashioned by treating the head of an ancient warhammer with a graphine coating and fitting it with a new steel grip. Though powerful when swung normally, with added centrifugal force it devastates anything unfortunate enough to be in its way. The head is forged from an exotic substance that rivals osmium for sheer density. Legend has it that it was formed when a molten piece of obsidian from a fiery inner circle of Hell plunged into the river Cocytus, quenching and crystallizing it into its current form.

This warhammer was used by Rachel while in New York attempting to find Ryu Hayabusa. She used this to defeat Marbus and cut off his remaining horn.

Rachel with the Hammer 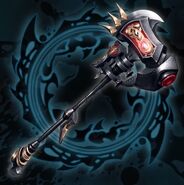