Physically Jô is a middle age man with a large muscular build. His ninja attire of choice is a white shinobi shozoku with some armor. Jô also has a battle scar on his cheek, a sign that he has fought many intense battles in his lifetime. After his fight with Genshin, Jo doesn't tie his hair and wore a fur vest over his white shozoku, he also wears a white headband over his eyes, implying that Genshin blinded him. However, this doesn't seem to affect his fighting performance (as seen in Ninja Gaiden 3).

Jô Hayabusa is a selfless ninja, he would sacrifice himself for the greater good without a second thought. Highly disciplined and a skilled ninja warrior, Jô constantly trains to attain greater power. He is wise and battle hardened from having fought many battles in his lifetime. Jô is also very knowledgeable in history, the ninja arts and ancient relics, these traits appear in his son as well, who later opens a curio shop.

A Master Ninja and leader of the Hayabusa clan, Jô resides in the Castle of the Dragon atop the Hayabusa village which he oversees. As a living descendant in a line of warriors known as the Dragon Linage, Jô is a Dragon Ninja tasked with safeguarding the ancient relics of his ancestors. This constantly puts him at odds with the Dragon Linage's mortal enemies, the Fiends, a race of supernatural beings bent on retrieving these powerful relics and exterminating the Dragon Lineage. At the same time his Hayabusa clan is embedded in generations of violent conflicts with the rival Black Spider Ninja Clan; another shinobi sect that unlike the Hayabusa clan, draw their blood and essence directly from the Fiend Bloodline.

Jô had gone off to train in the sacred wilderness during the Dark Dragon Blade Incident, leaving the Dragon Sword, an ancient relic passed down the generations of Dragon Lineage warriors, to his son Ryu Hayabusa.

Having not returned from the sacred wilderness yet, Jô is briefly mentioned by Genjiro a Hayabusa Ninja veteran who had fought alongside him, and by Omitsu who writes a letter to Jô, commenting on how his son Ryu has grown up.

Eventually Jô returns to a massacred Hayabusa village, although horrified at what took place in his absence, he is also proud to witnesses his son's high skill and proficiency with the Dragon Sword. Jô is then ready to part with the sword, passing it down to his son, from one Dragon Ninja to the next Dragon Ninja as in the tradition of the Dragon Lineage.

At the conclusion of a millennia old conflict between the Vampire fiends and Dragon Ninja, Jô squares off against the Vampire Lord, Crimson at night in an urban city. At first it looks like Jô has the upper hand as he dodges an attack, then does the flying bird flip up two buildings and Izuna Drops the Vampire Lord, smashing him into a car. But the Vampire Lord gets up and catches Jô off guard, injuring him with a vampire bite. As Jô is about to fall, Ryu enters the battle just in time to assist his father and together they battle the Vampire Lord, where Jô is further injured when he takes a sonic blast to protect his son. The battle concludes when Jô uses the light from the Eye of the Dragon to weaken the Vampire Lord while his son slays the fiend, ending the age old conflict that would come to be known as the Vampire War. However Jô leaves the battle injured, which worries the Hayabusa village as he is bedridden, while outside Momiji asked about his condition in full anticipation with the other villagers. Ryu assures everyone that his father will be fine.

While Ryu fights the Black spider clan in Tokyo, Genshin and a large number of Spider Ninja attack the Hayabusa Village and set the Castle of the Dragon on fire, as Jô is still recovering from his last encounter. Jô waits in the top tower of the castle, protecting the Demon Statue. Genshin breaks in and engages Jô in a duel to the death. After a long battle, Jô is knocked over a ledge with debris falling over him as his son enters the room too late, Genshin then attempts to finish off the Dragon Lineage as he fights Ryu. However Jô survives, and after freeing himself he gets back to the floor above and rejoins the battle. Jô tells Ryu to go after Elizébet who has the Demon Statue, as he held off Genshin on his own. In the end Jô manages to survive the battle with Genshin, but he is more injured than before. Bedridden, Jô sent Ayane, a kunoichi from the Hajin Mon sect of the Mugen Tenshin Ninja clan, to retrieve the Eye of the Dragon and deliver it to Ryu.

After Ryu has been afflicted with the Grip of Murder, Jô, blinded from his last battle with the Spider Ninja Genshin, tells his son about the bad karma behind the Dragon Clan. He reveals that the Ryuken was a gift to kill the Evil Deities, but was tainted by the souls of the countless victims it accumulated through history, and that the curse is the malice it absorbed festering and corroding his body, just like a Dragon Ninja from the past. He tells his son that the curse on his arm caused by the Dragon Sword is the karmic retribution for all the sins the Dragon Ninja of the past had committed, but tells Ryu to brave the darkness in order to fulfil his duty, less the consequences become dire.

Later, when Canna goes on a rampage on Tokyo in her Goddess form, Jô arrives with Momiji to save Ryu from being overwhelmed by multiple enemies. He lets his son run off to deal with Canna while he and Momiji stay behind to fight of the enemies.

Ryu arrives at a tower, and Jô, from atop the pagoda, challenges him to a final trial to finish his training. After climbing to the top, Ryu faces him in a fierce battle, from which Ryu emerges victorious. Ryu questions the need for his training but Jô assures him that his skills will be needed someday.

Jô then declares that he no longer have more regrets and claims that he will now defeat the Jaquio.

In an open tall grass field and under the light of the moon, Jô engages Bloody Malth in a duel and is defeated. As a precaution Jô had left a letter entrusting the family heirloom to his son, Ryu, and telling him to go to America to find Doctor Walter Smith if he fails to return home. Presumed dead, he is later revealed to be alive, under the Jaquio's control as "the masked devil". Jô manages to break free of the spell thanks to Ryu destroying the device controlling his mind. However he sacrifices himself to protect his son, by taking one of the Jaquio's energy bolts aimed at the latter. As the temple collapses from the Demon's defeat, Jô slowly succumbs to his injuries. With his dying breath, Jô tells his son that the time has come to carry on without him, and tells him to be ever brave. Proud of his son, Jô dies in the arms of his distraught son. 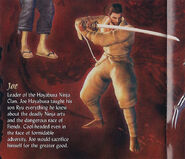 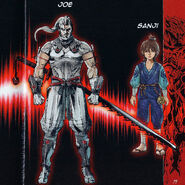 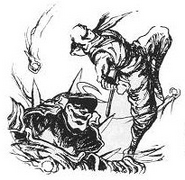