Kasumi (かすみ) is the main character of the Dead or Alive series. She made a cameo appearance in Ninja Gaiden Sigma 2, and returns as a free DLC character in Ninja Gaiden 3: Razor's Edge for the Wii U system and as an unlockable character for the Xbox 360 and PS3 systems.

For her cameo appearance in Ninja Gaiden Sigma 2, Kasumi wears a blue ninja dress that is a little different from her trademark outfit from the Dead or Alive series. It is a blue, side-tie dress with long pull-on sleeves, white trim, her name (written in Japanese) stitched in yellow on the back, and a yellow-colored bird pattern on the skirt, complete with stockings, knee-high boots and arm-guards. Kasumi also has kunai tied on her left leg and her trademark kodachi (a slightly longer wakizashi sword) with a golden tassel tied to the back of her waist by a red sash.

In Ninja Gaiden 3: Razor's Edge, Kasumi wears her new ninja costume from Dead or Alive 5, but with a few alterations. It is a black leather ninja outfit with long black gloves, black arm-guards and shin-guards, throwing knives tucked in pockets on her waist, a blue choker necklace, and a blue ribbon that holds up her hair in a high ponytail. Unlike the original, Kasumi dons a long blue cape and has a windmill shuriken tucked on her left arm-guard.

In the Dead or Alive series Kasumi has always been portrayed as one who detests conflict and rather settle things in a peaceful manner. She is kind, caring, compassionate and loving to all those she encounters, whether they be friend or foe. Though despite this as a member of the Mugen Tenshin Clan she is a powerful fighter, willing to kill her enemies if it is absolutely necessary, and no other options are available. She is also one to always speak her mind, even if a situation calls for her to stay silent, and she is never one to just stand by and let any form of injustice happen when she is present.

Kasumi is the daughter and second child of Shiden and Ayame, and was born into the Mugen Tenshin Ninja Clan's head family as the second in line to the title of leader, after her brother Hayate. However, when her brother was nearly killed in a Ninpo duel by her evil uncle, Raidou, she left her village to get revenge for Hayate, and in doing so, broke her sacred oath, and is now hunted as an outlaw by her clansmen, including her half-sister Ayane. Despite this, she is still aided and protected by long-time friend, Ryu Hayabusa.

She entered the first Dead or Alive Tournament where she defeated Raidou, and following her victory, she was kidnapped by former DOATEC member Victor Donovan and put through experiments to clone the ultimate fighter from her DNA. Now she makes it her goal to stop Donovan from completing his evil plots once and for all. By the end of Dead or Alive 5, she finally became at peace with Ayane and Hayate.

Although Kasumi appears in Ninja Gaiden Sigma 2, her face is never seen. For unknown reasons, she observes Ryu Hayabusa's fight against the Black Spider Ninja Clan and the Fiends. At the Aqua Capital, Kasumi watches as Ayane defeats and kills Obaba. After the fight, she disappears within a whirlwind of sakura petals.

In the post-credits scene, Kasumi finds Ryu Hayabusa after he had planted Genshin's Blade of the Archfiend into the Black Spider Ninja Clan's graveyard. He tells her that darkness is destined to be lifted in the end and he still had much left to do.

Kasumi appears as a free DLC character for Ninja Gaiden 3: Razor's Edge' for Wii U and as an unlockable character for the Xbox 360 and PlayStation 3 systems. She plays no role in the story.

Her gameplay is similar to a more balanced Ayane, while appearing to fight like Ryu. However, she is far more flashy and stylised than Ryu, with sakura petals often surrounding her movements, as it is one of her trademarks, and many moves have been taken from her Dead or Alive movelist and been incorporated into her gameplay. This marks the first time that she uses her wakizashi in gameplay. Kasumi can be played in the Chapter Challenges as well as in Ninja Trials.

Appearances in Other Media[]

In the non-canonical 2006 feature film DOA: Dead or Alive, Kasumi is portrayed by Devon Aoki, and bares a cold personality, as opposed to her calm and compassionate nature in the games.

In the movie, she runs away from her clan to find her brother Hayate, who had been missing for a year, and was invited to the Dead or Alive Tournament. Victor Donovan told her that Hayate died during last year's tournament by Leon's hand. However, shortly after she fights Leon and wins, she has serious doubts that Hayate could have died from facing Leon. In the end, she got to go home with her brother despite being a runaway shinobi. Throughout the movie, she and Ryu have shown to have romantic feelings for each other.

Kasumi also appeared in Monty Oum's fan series, Dead Fantasy. She fights with her kodachi and utilizes her ninpo spells and teleportation ability. Her main rival is Yuna of Final Fantasy X. As of the fifth episode, Kasumi is currently under the care of Ryu and Momiji, who are most likely getting aid for the wounds she received from her battle with the Kasumi Alpha clones. 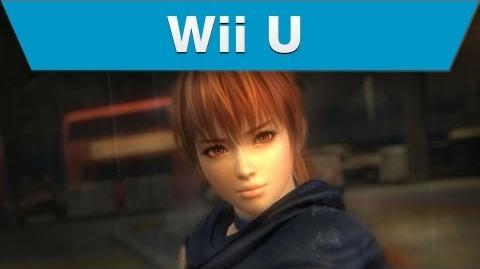