Ken Ishigami (石神謙 Ishigami Ken, Ken Ishigami?) is the Secretary of Defense for the Japanese government, making his debut in Ninja Gaiden 3.

Ishigami is an elderly man with grey hair and brown eyes. He also has a scar on his lower left cheek. He wears a black coat with black gloves and walks with a cane.

Ishigami is a politician of the Japanese government, faithfully fulfilling his duties to protect his country. As the game progresses, he seems albeit shady. This is because of his suspicions of Cliff and his connection with the LOA. Later it is revealed that Ishigami was good friends with Mizuki's father, and promised him that he will protect his family. That's why he loves Mizuki McCloud like his own daughter, and is willing to do anything to protect her and Canna.

Ishigami is accompanied by Mizuki McCloud of the JASDF as they visit the Hayabusa Village to see the renowned Master Ninja Ryu Hayabusa. He tells the young ninja that he's the target of a terrorist group in London, England and assigns him to assist Mizuki in bringing it down. After the failed attempt to save the prime minister, Ishigami issues orders to Mizuki from with in the JSDF Destroyer Yunagi. He soon begins to suspect Cliff, Mizuki's brother-in-law, for connections with the LOA Conglomerate. After finding Ryu in Antarctica, he reveals his past with Mizuki and her family. He then guides Ryu via radio link to find Mizuki's daughter Canna. When he finds out that the Regent of the Mask is actually Canna's father, he has a helicopter ready for Ryu and guides him through the streets of Tokyo to confront the Goddess. After Canna is saved, Ken finds Hayabusa in an alley preparing to leave. He tells Ryu that he is neither a murderer or a hero, and thanks him for saving Mizuki and Canna. He reassures Canna that Ryu will always be there for her, and turns to see Ryu on the rooftops, before the Dragon Ninja takes off into the dawn. 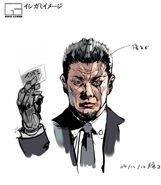