The Kusari-Gama (鎖鎌, Kusari Gama?, Chain Sickle) is a Ninja weapon consisting of a long chain with a sickle on one end and a heavy weight on the other, it is one of Ryu Hayabusa's available weapons in Ninja Gaiden II, Ninja Gaiden Sigma 2, and Ninja Gaiden 3: Razor's Edge. Its origin is said to have come from innovative peasant ninjas, whom were disallowed to own weapons developed the Kusarigama from farming tools such as the sickle and chain.

Quoted directly from the game:

The Kusari-gama, or chain-sickle, is a traditional Ninja weapon consisting of an iron weight on a chain attached to the handle of a sickle. The Kusari-gama is capable of a vast array of free-form attack techniques, but is difficult to control and practically useless in battle unless skillfully wielded. Made by the skilled craftsman Shishido Tessai, this paricular weapon's length of chain and heft of weight are at their conceivable limit, making it even more unpredictable and difficult to wield than normal. The legendary Shishido is well known for creating such strange and unique weaponry, but for whatever reason is met with much disdain by Muramasa.

Ryu swinging both ends of the Kusarigama while holding the chain at the middle. 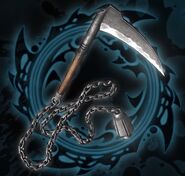 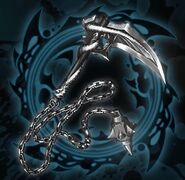 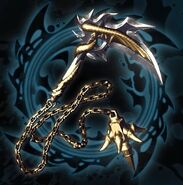