The Lock-On Bow is a long range projectile weapon used by Ryu in Ninja Gaiden 3.

It is acquired from Mizuki in Rub'al Khali at the beginning of "Day Two". This bow, made by Cliff Higgins, can lock on to enemies. The bow is later upgraded to fire explosive arrows and during Ryu's recovery in the Hayabusa Village, is further upgraded by Omitsu, allowing it to fire two arrows when charged enough. When doing so, the second arrow will automatically lock onto the enemy nearest to the target, allowing Ryu to shoot two enemies at a time. The bow is eventually destroyed by Cliff when Ryu attempts to attack him with it.

Despite the bow’s destruction, Ryu is seen with it again in Yaiba: Ninja Gaiden Z, albeit in a cutscene only. 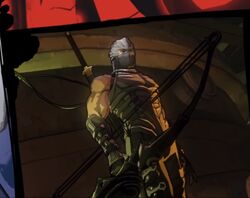