The Lunar Staff (無想新月棍, Mushō Shingetsukon?, Thoughtless New Moon Staff) made its début when it was added to Ryu Hayabusa's arsenal in the Hurricane Pack download for Ninja Gaiden.

It is the only other weapon besides the Tonfas and weighted part of the Kusari-Gama that crushes and pulverizes enemies instead of slicing and cutting.

Consisting of a staff made from a willow tree that is said to be tied to the moon and a pair of metal tips on each end. In Ninja Gaiden it started off as a wooden staff with flat metal end caps on both ends. Upon upgrading the metal caps became pointed spearheads similar to a halberd and the wooden staff became encased in steel.

In Ninja Gaiden II and Ninja Gaiden 3: Razor's Edge, the Lunar Staff starts out look like the 2nd upgraded staff from Ninja Gaiden, it is then upgraded further with the staff becoming thicker and the pointed ends becoming heavy spiked maces connected to the ends of the staff by a retractable chain.

The style in which Ryu uses it is similar to that of Bōjutsu.

A weapon said to obtain mysterious power of the Moon. It's made of a strong willow tree.

A staff said to harbor the mysterious powers of the Moon.

The Lunar Staff is an Asian style quarterstaff that is said to harbor the mystic powers of the moon.

When the moon enters the full or new phases, the density of the staff’s shaft increases, and it becomes slightly heavier as a result. The shaft of the weapon is made from a strong piece of willow, treated with special oils and waxes to make it an exceptionally tough material. Animal tendons are wrapped around the shaft, and a layer of bone glue holds them in place. Finally, an outer shell of steel encases the entire shaft. The points on both ends of the staff are made from an alloy of high relative weight that contains iridium derived from meteorites. Muramasa insists that the animal connective tissue used to bind the staff is the Achilles’ tendons of a qilin, which is a mythical creature known throughout the cultures of East Asia.

After arriving in Tairon, seeking revenge for the attack on his village, Ryu finds the Lunar Staff in a pot near the Twin Serpent Plaza.

Ryu used this staff many times during the Dark Dragon Blade Incident, as well as bringing it to Muramasa to increase it's physical limitations, allowing Ryu to perform moves that would have likely destroyed the unupgraded staff, as it would have been pushed beyond its limitations. The end result was a lunar staff encased in metal with deadly halberd spear tips on each end.

While investigating the Black Spider clan's activities in Tokyo, Ryu comes across a more powerful Lunar staff gripped in the hands of the statue of Mercury. Unlike his previous staff, this one was already encased in metal and had heavy spiked mace tip ends. Taking the staff, Ryu would slay many of his enemies with it in his quest to stop the Archfiend.

As he did with his previous Lunar staff, Ryu brought this staff to Muramasa for upgrading, who increased the Lunar staff's strength, durability and gave the spiked mace ends retractable chain links.

It doesn't do a massive amount of damage, but it has a larger range than any other weapon(excluding the Kusarigama) and is perfect for combination attacks. It is particularly effective against groups of Bats, phantom fish, etc.

The Dance of Flame is one of the best Ultimate Technique attacks in Ninja Gaiden II, allowing a complete 360° kill-spin at the end of the attack (when Ryu unleashes a blast of flames). This is particularly useful against groups of ninjas, as it easily leads to numerous instant-kills for large sums of yellow essence.

Hint: Charge up the Lunar Staff's Ultimate Technique fully, and unleash it on a large group of ninjas for quick cash. If done correctly, you should receive 2000-4000 yellow essence per group. 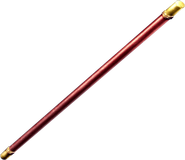 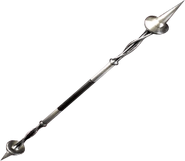 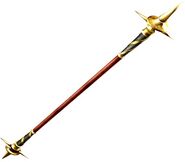 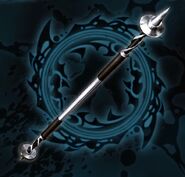 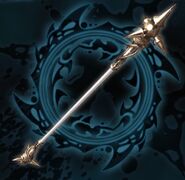 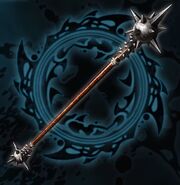