Miss Monday is a scientist working for Forge Industries that helped bring Yaiba Kamikaze back to life. She works for Forge Industries and acts as Yaiba's partner throughout his quest for vengeance against Ryu Hayabusa. She stays with Yaiba even after he refuses to go along with Alarico del Gonzo's plot.

Miss Monday is an attractive young woman with red hair styled in twin tails and various tattoos across her body, including a star over her right breast and a snake across her left arm.

She wears a revealing black dress with a tie and labcoat over it, and a frilly pink brassier beneath it. She also wears knee-high black boots with heels and red laces.

Monday enjoys her job at Forge Industries, as it lets her pursue science while giving her a lot of freedom. She has a sarcastic streak and a rampant sense of humor. She is also described as not differentiating much right and wrong, making her the perfect partner for Yaiba.

Monday is a person of impulse. She rejects Yaiba's sexual advances multiple times, yet it is later revealed that she had sex with him while she was rebuilding him.

According to her own tellings, she was once a scientific prodigy on the verge of finishing her PhD. Having grown sick of the board she was to present to, her own invention ended up killing one of the members. This apparently left her "in exile,' until Forge Industries head Alarico del Gonzo approached her with a job offer.

As a scientist working for Forge Industries, Miss Monday is assigned to revive and rebuild Yaiba Kamikaze into a cyborg ninja. Monday becomes Yaiba's partner, tasked with walking him through how to use his new cybernetics to slaughter the zombies he faces. She speaks with him through headset, providing instructions and conversation. Yaiba has no concern for Forge Industries, only wishing to find and kill Ryu Hayabusa for having killed him in the first place. The two of them work their way through the zombies until Yaiba comes face to face with Hayabusa.

The two battle ferociously in the underground caverns. Hayabusa was preoccupied: him and Momiji determined to destroy the caverns at any cost. Even with the threat of Yaiba, Hayabusa wouldn't let his mission fail. He and Yaiba fall from the platforms they stand on. Aerial combat leads to Hayabusa overcoming Kamikaze, performing his legendary Izuna Drop and sending Yaiba plummeting downwards to the bottom of the caverns. Yaiba's heart stops, he lays lifeless until Monday finds a way to repower his body and jolt him back to life. Upon waking up, Yaiba finds that he lays next to an enormous alien creature, resting at the bottom of the caves. As usual, Monday talks Yaiba through his battle with Hayabusa, astonished at the ninpo powers the Dragon Ninja displays. The fight comes to a standstill when Momiji is sent tumbling to what could be her death. Hayabusa is forced to disengage and keep the slab of stone she stands on from tumbling. Refusing to let Momiji die, Hayabusa accepts his "defeat." He asks that Yaiba take a book he had found somewhere along the way, revealing the truth to Yaiba and Monday. Alarico del Gonzo was the one behind the outbreak of the zombie virus. He intended to harvest compound 72 from the alien creature's body, and when his project became endangered he caused the outbreak.

Yaiba refuses to go along with del Gonzo's insanity, tossing away the book given to him by Ryu: the one coveted by del Gonzo. He then tears out the power core keeping him alive and running his new systems, prepared to die. Monday decided to join Yaiba, salvaging him from the caves and keeping him alive. The two of them remain allies, fighting against del Gonzo. She continues in her regular capacity. Eventually Yaiba discovers that during his cybernetic reconstruction, Monday had taken it upon herself to "perform a test" on his systems by having sex with him.

Once Del Gonzo is defeated and trying to escape from Yaiba, Monday suddenly appears out of nowhere and shoots Del Gonzo's head for good. She is resigned to accept their deaths, telling Yaiba that they have no way back from the alternate dimension del Gonzo put them in. Yaiba grabs onto an alien creature flying in the skies, climbing onto it's back. Yaiba takes Monday with him and they leave the alternate dimension. Monday reveals to Yaiba that his cybernetic eye had recorded what he saw in the book. The two of them possess the cure for the zombie virus. The two plan on releasing the cure to the world, after several months to allow the price to rise. 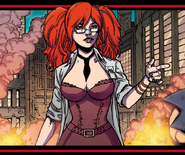 Miss Monday as she appears in the Dark Horse comic.