Ninja Gaiden, known as Shadow Warriors in Europe and Ninja Ryukenden in Japan, is a platformer game for the Nintendo Entertainment System developed by Tecmo. Originally released in Japan towards the end of 1988, it was the first in a popular trilogy of Ninja Gaiden titles for the NES featuring the adventures of Ryu Hayabusa. This game is currently available for download for 500 Wii Points on the Wii's Virtual Console in North America. For Europe, Australia and New Zealand the game costs 600 Wii Points as part of its 'Hanabi Festival', where people can buy games not released in Europe for a higher price, despite the fact that Ninja Gaiden was released in Europe on the NES.

The game is renowned for its innovative use of cinematic cutscenes. It represents one of the first NES games to feature a full, movie-like story. The game's success spawned two sequels and several ports to other video game systems.

Ryu Hayabusa of the Dragon Ninja Clan receives a letter from his father, saying that he was leaving for a duel with an unknown warrior. Should he not return, Ryu was to go to America and seek a man named Walter Smith. Ryu honors his father's last request, and travels to America. While there, he is kidnapped by CIA agent Irene Lew and given a statue of a hideous beast.

Eventually, Ryu finds Walter Smith, an archaeologist, who tells Ryu of the Demon Statues that he and Ryu’s father had found, and how they had to protect them. Ryu shows Walter the statue he was given by Irene. Ryu's father had the other statue with him. The two statues, combined with the body of the demon hidden away in a temple, could resurrect the demon. During the conversation, a masked figure suddenly breaks into the cabin and steals Ryu's demon statue. Ryu gives chase and retrieves the statue. When he returns, he finds that Walter has been mortally wounded and his own statue stolen; a moment later, Ryu is captured by three armed men.

Ryu is taken to an interrogation room, where he is addressed by a man named Foster, the director of the CIA. He explains to Ryu that they have been monitoring the activity of someone named The Jaquio. Jaquio wishes to gain the statues so that he can release the Demon trapped in them, bringing out the end of the world. He orders Ryu to eliminate Jaquio.

Ryu parachutes into the jungle of Brazil, and makes his way up the mountains towards the Temple of Darkness. Jaquio threatens Irene, tricking Ryu into handing over the demon statue. On top of the East Tower, Ryu duels and defeats Malth, the man who Ryu's father supposedly dueled to the death. Malth reveals that Ryu's father is still alive.

Ryu fights his way to the throne room of the Temple where he finds Jaquio, who is using the body of the Demon to mind control Ryu's father. Ryu frees his father, who sacrifices himself to save his son from Jaquio. Jaquio is killed during the ensuing fight, but the Demon has already been awakened by a solar eclipse. Ryu is able to defeat the Demon after an epic battle. The Temple collapses, and Irene receives a communication from Foster instructing her to kill Ryu and steal the demon statues. Ryu overhears this and vows revenge against Foster. Ryu and Irene stare at the sun as it rises over the sea.

Jaquio's lieutenants in Ninja Gaiden. Personally chosen by the Jaquio himself, these four villains will do anything and everything to stop Ryu Hayabusa from completing his mission. The Malice Four are as follows:

Tecmo first announced the Famicom version of the game in the January 15, 1988, issue of Family Computer Magazine under the title Ninja Gaiden (which would later be used for the game's American version).[1] The game was released in Japan on December 9, 1988, under its final title Ninja Ryūkenden,[2][3] which roughly translates to Legend of the Dragon Sword. The Laserdisc for the 1990 Ninja Ryūkenden OVA features the alternate English title of Ninja Ryu: The Dragon Sword Story. It was developed and released around the same time as the beat 'em up arcade version of the same name; neither of the games were ports of each other but were parallel projects developed by different teams. According to developer Masato Kato (listed as "Runmaru" in the game's credits), the term "ninja" was gaining popularity in North America, prompting Tecmo to develop a ninja-related game for the NES at the same time the arcade version of Ninja Gaiden was being developed. Hideo Yoshizawa (listed as "Sakurazaki") developed and directed the NES version. Ninja Gaiden was Masato Kato's first full-time project as a video game designer, and he contributed the game's graphics, animations and instruction manual illustrations.

Drawing inspiration from the Mario series, Yoshizawa kept the same title but changed everything else; it became a platform game as opposed to a beat 'em up such as Double Dragon; the gameplay was modeled after Konami's Castlevania, with Ryu being equipped with a katana-like Dragon Sword, shurikens, and ninpo techniques such as fire wheels. In designing the protagonist Ryu Hayabusa, the development team wanted him to be unique from other ninjas. They designed him with a ninja vest to place emphasis on his muscles, and they furnished him with a cowl that arched outward. They originally wanted to equip Ryu with sensors and a helmet with an inside monitor to check his surroundings, but that idea was scrapped. According to Kato, they used specific locations and environments to justify the need for having a ninja for a main character. A further concern, according to Yoshizawa, was to appeal to the gameplay-oriented expectations of Ninja Gaiden's target audience, mainly represented by experienced players who appreciated challenging game design. He recalled that during development, Tecmo adhered to "the philosophy that the user would throw a game away if it wasn't hard enough". As a result, Yoshizawa decided to give the game an overall high level of difficulty.[4]

Yoshizawa placed greater emphasis on the story, unlike the arcade version, and wrote and designed a plot that included over 20 minutes of cinematic cutscenes—the first time an NES game contained such sequences. Yoshizawa stated that the adoption of this presentational style came from his earlier aspiration for a career in commercial filmmaking, which led him to seek an opportunity "to put in a movie somehow". His idea was to reverse the then-prevailing trend wherein the narrative aspects of contemporary NES games were undervalued by consumers with the inclusion of an interesting plot that could engage those players. Tecmo called the cutscene system "Tecmo Theater" where the game reveals the storyline between Acts through the use of animated sequences. They are used at the beginning of each Act to introduce new characters such as Irene Lew, Walter Smith, and the Jaquio. This feature uses techniques such as close-ups, alternate camera angles, differing background music, and sound effects to make the game more enjoyable for players. Unlike earlier titles such as Final Fantasy, the cutscenes consisted of large anime art on the top half of the screen with dialogue on the bottom half. This made the artistic style more reminiscent of other manga titles such as Lupin III and Golgo 13. Dimitri Criona, Tecmo USA's director of sales and marketing, said that console games had an advantage over arcade games in that they allowed the creation of a longer game and the inclusion of cutscenes, which Tecmo trademarked as "cinema screens". He noted console games required a different reward structure than arcade games. The game contains a feature that was originally a glitch but was left in the final game intentionally, according to Masato Kato; having lost to any of the game's last three bosses, the player is sent back to the beginning of the sixth act.

When the game's text was translated from Japanese to English, the game needed to be reprogrammed to accomplish this; different companies handled this process in different ways. Tecmo's Japanese writers wrote rough translations in English and then faxed them to the American division. According to Criona, the American division would "edit it and put it back together, telling the story in a context that an American English speaker would understand. This would go back and forth several times." Moreover, the game's text was stored in picture files instead of raw computer text. Because of the NES's hardware limitations, the English text needed to be very clear and concise to fall within those limitations; many times, different words with the same meaning but with fewer characters had to be used. All symbols and objects were scrutinized by Nintendo of America, who had specific rules on what could be included for North American releases; for instance, any Satanic, Christian, or any other religious, sexual, or drug-related references were not allowed.

Although the NES game, Ninja Gaiden, was the second title to bear the name, there were few similarities to the original arcade game. Ninja Gaiden in the arcade was a two-player co-op beat 'em up, reminiscent of other street fighting games such as Double Dragon. Besides the opening cinematic of a ninja duel and the similar opening urban stages, the NES and arcade games had different gameplay, graphics, and storylines.

Many video games were released bearing the Ninja Gaiden name between 1989 and 1992, including games for the PC, Atari Lynx, Sega Master System, Sega Mega Drive/Genesis, and Sega Game Gear. However, the only version that was a direct port of the NES title was the 1992 Japan-only release for the TurboGrafx-16|PC Engine. It featured an alternate English translation and more colorful graphics, as well as various difficulty and gameplay tweaks from the original. 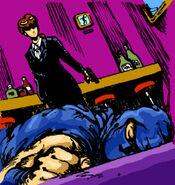