Ninja Gaiden Clans (100万人のNINJA GAIDEN,, 100 Man-ri no ninjagaiden?, lit. NINJA GAIDEN of 1 Million People) is a social game for Android and iOS devices based on the Ninja Gaiden franchise. It was originally announced at the Tokyo Game Show and E3 and released in Japan in 2012.

It was also announced to be released in North America in 2012 but was never released.

The game also involves card collection trading, like many other Mobage games. 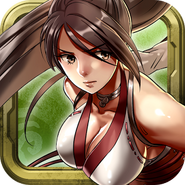 This article is a stub. You can help Ninja Gaiden Wiki by expanding it.