Ninja Gaiden II: The Dark Sword of Chaos, known in Japan as Ninja Ryūkenden II: Ankoku no Jashinken (忍者龍剣伝 II 暗黒の邪神剣, lit. Legend of the Ninja Dragon Sword II: The Demonic Sword of Darkness?) and as Shadow Warriors 2 in the PAL region, is the second instalment in the trilogy for the Nintendo Entertainment System. A licensed port was later released for DOS-based PCs and Commodore Amiga. It was released on the Wii Virtual Console on October 15 in North America.

Ninja Gaiden II features the same platformer gameplay as its predecessor, with some extra additions.

New to this sequel:

The story begins one year after the events of the original game. With the help of a mysterious Special Forces agent named Robert T.S., Ryu Hayabusa learns that Ashtar, a dark wizard, has kidnapped Irene Lew, Ryu’s girlfriend. Ryu pursues Ashtar to his shrine. Once there, Ashtar stabs Irene in the back, laughing as her blood drips from the sword's blade. Ashtar's true intentions are finally revealed; his sword feeds on chaos and hatred, and he plans to use its power to open the gates to the Realm of Chaos, releasing the demonic hordes that reside within. Ryu and Ashtar clash, and after an epic battle, Ashtar falls. With his last breath, Ashtar sends the sword and Irene into the Realm of Chaos. Ryu follows them into the realm.

In the realm, Ryu finds Irene and Jaquio, who was thought to have been killed in the previous game. He has taken the Sword of Chaos, and plans on accomplishing Ashtar's objective, with the added objective of expanding his power by taking in the energy that will be expelled by the opening of the gate. Ryu, intending to prevent this, launches into battle. After another epic fight, Ryu strikes Jaquio down once more. When Jaquio’s blood touches the blade of the Sword of Chaos, the sword fully awakens, and Jaquio is physically revived by the power that flows into him, morphing into a giant monster. After Robert seemingly sacrifices his life to buy the hero more time, Ryu summons all the strength he has left to kill Jaquio once and for all.

The Tribesmen of Chaos are loyal servants of Ashtar. Here are the following:

Through the use of alchemy, it is believed that Dando is a transmutated monster made from souls of long dead Vikings. Although he is gifted with sheer strength, it appears that he was not given much intelligence. He endlessly charges at Ryu on sight, only stopping when hitting a wall. He may be considered the lowest rank of the Chaos Tribesmen. The Dragon Sword and bullets from Robert's gun seem more than enough to destroy him. He is found at the Train Station.

One of the scientists at the Xabil Biological Research Institute was doing research on a new species of tarantula spider, when he was bitten by one. As a result of this bite, the scientist was transformed into a half-human/half-spider mutant. He is able to superhumanly leap gracefully through the air. He can summon and control giant tarantula spiders, just as if they were his own children. It is said that Baron Spider is the Leader of the Chaos Tribesmen. Considering the fact that in defeat, he mentions that the Tribesmen are led by Ashtar, he may be Ashtar's right-hand man. He tries to ambush Ryu at the top of Lahja Mountains.

Funky Dynamite is a lizard creature, which was increased in size by Ashtar's alchemy, and was also given cybernetic limbs and implants. This half lizard/half machine flies endlessly through the air with a jet propulsion pack, and attacks Ryu with shurikens. The creature however, lands upon receiving damage, and retaliates with fire bombs. Despite the fact that the half lizard/half machine hybrid was never given any combat skills, this creature is released as an ambush on Ryu, at the rooftop of the Tower of Lahja. Funky Dynamite is believed to be another Chaos Tribesman.

There is a legend from ancient times that states that a creature, believed to be a dragon, somehow wandered into the underworld at least 1,000 years ago. It has been said that the creature was influenced by the dark magic of the underworld, and became trapped within the walls of a cave. Perhaps Ashtar lured and trapped the creature on purpose, and used alchemy to have water endlessly flow from the dragon's mouth? It is uncertain. In any case, the water dragon is within the ranks of the Chaos Tribesmen. Unable to move, with water mysteriously ever flowing from the creature's mouth, the water dragon only attacks Ryu with his huge claws. Naga Sotuva is the found living in the walls, deep in the depths of The Maze of Darkness.

The self-proclaimed "Emperor of Darkness". He is responsible for the attack of the Chaos Tribesmen, as well as the disappearance of Irene. He is also owner of the Chaos Sword, and gatekeeper to Gate Of Darkness. Is he merely a servant to Jaquio??

Jaquio's loyal pet dog. Kelbeross was once killed by Jaquio, and offered as a sacrifice by to the evil spirits that Jaquio pledged his life to. As a result of the sacrifice, the soul of Kelbeross returned with a monstrous body and dark powers. Being given a doppleganger, and the ability to spit a mysterious substance, the Kelbeross continues to be a loyal servant, protecting its master.

The self-proclaimed "Evil Demon King," as his title reads in Japanese. Also known as Guardia de Mieux, he intends to gain the power of Jashin to control the world, by using the Light and Darkness Demon Statues to release the power of the Demon. There has been much confusion and debate concerning who the true evil enemy is, between Ashtar, Jaquio and Jashin. 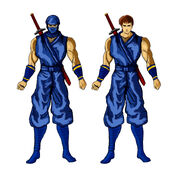