Ninja Ryukenden (忍者龍剣伝, Ninja Ryukenden? lit. Legend of the Ninja Dragon Sword) was an OVA sequel to the Classic Ninja Gaiden games, released in 1991. Taking place after the defeat of the Demon in Ninja Gaiden II: The Dark Sword of Chaos. The Animation stars Ryu Hayabusa who is living in New York alongside Irene Lew, running a curio shop.

In New York, Ryu Hayabusa was pursued by two strange beings in business suits wearing wrist blades. After a brief fight, he defeated them both, and found an ID card belonging to Friedman Enterprises. The monsters then exploded, leaving Ryu with more questions than answers. Ryu left the scene, and was confronted by his girlfriend, Irene Lew, who wanted him to come home for her birthday. However, Ryu refused since he had to infiltrate the headquarters of Friedman Enterprises.

Later on, Irene talked to her friend, the reporter Sara about Ryu. Irene wanted Ryu to stop working so much, so Sara agreed to convince her boyfriend, Robert T. Sturgeon, to convince Ryu. Meanwhile, Ryu attended the press conference that Ned Friedman was holding to announce his cure for cancer.

Ryu's suspicions were confirmed when he received visions of a young girl trapped in Dr. Friedman's headquarters building while jogging near it. He decided to investigate, as Robert, Sara, and their friend Jeff decided the same after meeting up in a bar. Both groups went in, and discovered the fact that Dr. Friedman was creating Demons. Sara wanted to report on it, but Ryu prevented her from doing this. The groups left, but Robert stopped Ryu to talk to him. Ryu eventually left after a fruitless attempt by Robert to convince him to let them help him.

The next day, Robert, Sara and Jeff proceeded to interview Professor Bucky-Wise about Ned Friedman, and it soon become obvious that Bucky-Wise knew more about Ned than he was letting on. That night, Irene and Ryu were closing up shop when Bucky-Wise's cat entered the shop, immediately followed by more business suited demons. Ryu attacked the monsters while Irene killed one of them with a headshot. As the police arrived Ryu told Irene that his duties came first. Irene agreed with him and headed back to her apartment, where she is kidnapped. Robert and the others gave chase, but Friedman's henchmen got away with Irene.

Ryu donned his ninja clothes and prepared to go all out against Friedman's forces. Meanwhile, Robert and Jeff also arrived there (having had to tie up Sara to stop her from coming with them) and stormed the building. Meanwhile, Ryu found Friedman's secret abomination creating lab with the help of the girl from earlier, and blew it up. However Friedman still had the power of the Evil Gods using the Bone of the Demon that he obtained from the Demon's defeat at Ryu's hands. Robert and Jeff, meanwhile, were still fighting, but Jeff was taken down by a monster and blew up the entire floor to buy Robert time.

Ryu and Robert both entered the room where Irene and Friedman are. A brief exchange of words followed, before Friedman was stabbed in the back by Professor Bucky-Wise. Bucky-Wise revealed that he was behind the whole plot, having kidnapped Ned's daughter (the same girl Ryu had visions of), Katherine Friedman, to force him to recreate the Evil Gods, before killing him in front of her. Bucky-Wise revealed more of his evil plot to combine the piece of the Evil Gods with the recreated Evil Gods. He then proceeded to turn into a large, green demon that was evenly matched with Ryu before overpowering and stabbing through Ryu's arm. Irene was attacked by the demonic Bucky-Wise, which energized Ryu to unleash the true power of the Dragon Sword. With this, the group celebrated, with Jeff having survived his seemingly deadly sacrifice, Robert planning to get married to Sara, and Ryu and Irene closer than ever.

Unbeknownst to them, Katherine was possessed by the Demon Bone that was in her possession... 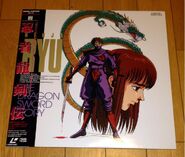