The Shuriken (手裏剣 Shuriken; Sword Hidden in Hand) or "Ninja Star" is a traditional ninja projectile weapon that come in various shapes, and used by Ryu Hayabusa throughout the Ninja Gaiden series. They are usually star shaped and are thrown at the enemy. They are lethal when used by Ryu Hayabusa in cutscenes, however the shuriken does very little damage in game.

It is no exaggeration to say that this weapon epitomizes the Ninja.

Shuriken are implements designed to cause injury when thrown at an enemy, and most Ninja carry them at all times. This particular type of Shuriken, which boasts six blades, is officially known as a Roppoken, or six-sided star, and is of the Kuruma-ken (round) category of Shuriken that spin when thrown. Due to the disposable nature of these weapons, expensive materials are rarely used in their construction. However, they are crafted with great precision to stabilize their trajectory when thrown, thereby increasing accuracy.

P.S: B is Circle in Playstation 3

In game techniques with shuriken consist mostly of stun tactics, allowing Ryu to break an opponent's combo and stun them momentarily. This gives Ryu an opportunity to strike with a primary weapon. Experienced players will often use shurikens between combo pauses to keep constant damage, and stun the enemy against the next attack or cancel an attack with long recovery time that would leave Ryu open to attacks.

It is also great for briefly stunning projectile enemies in the background while you take on the melee enemies. 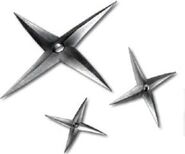