For the monsters found throughout the series, see Fiends.

The Demon (邪神 Jashin; Evil Deity) is the main worldly threat for the first and second instalments of the classic Ninja Gaiden trilogy.

The Dark God has a large insectoid body with a grotesquely misshapen humanoid head. On its abdomen is a crystal orb, which was used on Jô Hayabusa to control him as the Masked Devil. Even with its head cut off, it could still fight by using energy assaults.

700 years ago, the Demon wreaked havoc upon the Earth, leaving a trail of death and destruction in its path. Eventually a Dragon Ninja, Shinobi, would step forth to challenge the Dark God, using the Dragon Sword to defeat it. Although the Dark God was defeated, he could not be killed. Shinobi, realizing this, used a spell to separate its essence and imprisoned them into twin statues; The Demon Statue of Light, and the Demon Statue of Shadow, imprisoning its body within an Amazonian temple in what would be known as South America. It was prophesied that if the twin statues ever merged during a "black moon" while in the presence of the body of the Dark God, the Demon would rise again, and in all his fury, hurdle the world back into an age of chaos and bloodshed.

Centuries later, Dr. Walter Smith, an archaeologist, found the sealed shrine where the Demon was imprisoned, and takes the Shadow Statue, while his colleague, Jô Hayabusa kept the Light Statue. However, years later Guardia de Mieux, the self-proclaimed Jaquio, orchestrated his heinous plans to revive the Demon. Calling on the Malice Four, he captures Jô Hayabusa in search of his statue. His son, Ryu Hayabusa defeats the Malice Four and finally Jaquio himself, but is too late to stop the Demon's resurrection. The enraged dark god attacks the Dragon Ninja with all its fury but is vanquished by the young Hayabusa in the end.

After his defeat at Ryu Hayabusa's hands, the Demon's spirit possessed the dead body of the Jaquio. Jaquio planned to throw open the Gates of Darkness and usher in the Age of Eternal Darkness. After the Jaquio is defeated a second time, he transforms into a monstrous creature. Ryu defeats the transformed Jaquio, only to face the fully reincarnated Demon itself. Through the power of the Dragon Sword, the Dark God is vanquished, resealing the gates of Hell.

After the Demon was destroyed, two professors, Bucky Wise and Ned Friedman, collected a fragment of the Demon's body and recorded the surge of the Demon's power. To make a copy based on this Bucky Wise kidnapped Friedman's daughter Katherine Friedman, and persuaded him to aid him, resulting in the creation of a superhuman manufacturing device. Once Ned baited Ryu into searching for Irene Lew, Bucky Wise reveals his true colors, explaining that the form Dark God's power was inside of him. Ryu, Irene, and Robert watch as Bucky Wise turns into a humanoid manifestation of the Demon himself. He is defeated for the final time, impaled through the abdomen by a fully charged Dragon Sword as Ryu ran him through. However it is revealed that Katherine was in possession of the Demon bone, filling her with dark energy. It is unknown what happened to her or it. 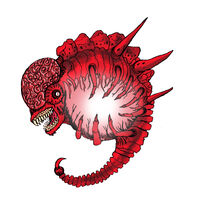