The Tonfa are fast, brutish weapons that can crush enemies. They are made of wood, reinforced with super hard steel.

Quoted directly from the game:

The Tonfa is a representative weapon of the ancient Ryukyu martial arts, developed in what are now the islands of Okinawa. Although Tonfa have a short reach, they are extremely fast and can be wielded in a number of ways to exploit their strengths in offence and defence. This versatility has led Western countries to adapt Tonfa into police nightsticks. These particular Tonfa have high-density, super-hard tungsten carbide plating on all impact surfaces, including the tips and outer edges. This provides for immense impact damage while still remaining compact. Because these Tonfa are not bladed, they are incapable of cutting attacks, but they make up for this in their ability to pulverize human flesh. These specially-modified Tonfa are so much heavier than typical Tonfa that only the most talented martial artists are even capable of spinning them.

Ninja Gaiden II : During Chapter 7 - The Flying Fortress Daedalus, and after acquiring the Art of the Piercing Void ninpo, near a Test of Valor you will use a console to open a passage below. Drop down into the room and find two corpses. One carries Incendiary Shuriken; the other corpse carries the Tonfa. If you miss them they are available for purchases in Muramusa's shop later on.

Sigma 2 : The Tonfa are found in Chapter 7 - the Lycanthropes' Castle, in a semi-circular room with what appear to be knightly harnesses of armour in a ring along the wall, about half of the way up. At the centre of the semi-circle, on a raised section of floor next to the wall opposite the armours will be a chest containing the Tonfa. 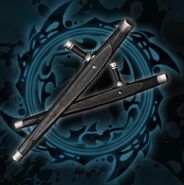 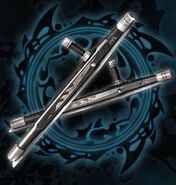