The Underworld (魔界 Ma-Kai; the Fiend Realm) is an area encountered in Ninja Gaiden (Xbox), Ninja Gaiden II/Sigma 2 and Ninja Gaiden: Dragon Sword. This is the place from where many Fiends originate from, as well as where the Greater Fiends are sent to when killed. The leader and ruler of this realm is Marbus. It is also known as the Realm of Chaos, the World of Chaos and the Chaos Realm.

Known as Hell in Christianity, Hades in Greek lore, Naraka in Buddhism, Yomi in Shinto or simply the Netherrealm, this is the home of the wicked souls who die in the world of the Living, and home of the most vile of creatures, the Fiends. Here Ryu Hayabusa, the last Dragon Ninja, must confront ghoulish beasts and devils from beyond his worse nightmares, some of them including Black Spider Ninjas that have perished at his hands.

Ryu's first stop. It is here that he confronts the first wave of newly reincarnated horrors, such as the Fiends and the fallen members of the Black Spider Ninja Clan. Among the magma filled land scape are withered trees engulfed in hellfire.

One of Alexei's quarters in the Underworld, it said that those who touch this frigid area can never leave and are doomed to never see the light of the Living again. Here Alexei held Sonia imprisoned to be his "pet" until Ryu killed him.

The Hall of Blood[]

A gruesome path filled with pools of blood provided by veins surrounding the pillars. in some of the pools of blood are Blood Eels who snatch up their unfortunate prey. Here Ryu does battle with a resurrected Genshin, now a Fiend, and the reincarnated Elizébet.

This is an area of the Underworld before reaching the "Gate to Hell", a large skeletal door that leads to the Abyssal Underworld. It is here where Ishtaros is fought, with Momiji held captive between two skeletal hands protruding from the Underworld Gate.

An area connected by narrow paths with large skeletal figures in the background. This is where Ryu has a confrontation with the Black Dragon Clone (if on Master Ninja Mode) and the skull-form of Vigoor before plummeting down to the Edge of Darkness.

The Edge Of Darkness[] 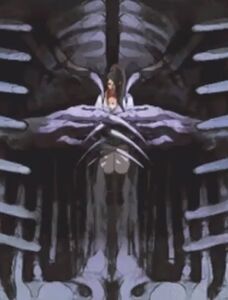 The Underworld Gate where Momiji is imprisoned.