Vigoor (邪神 ヴィゴル Jashin Vigoru; Evil Deity Vigoor) was the origin of all evil and hate mentioned in the backstory of the Ninja Gaiden series.

Though his appearance has yet to be revealed, it may be similar to the demon statue representing him.[1] From the description in the Necromantale, Vigoor at least has a head, two arms and two legs.

The embodiment of all things evil, Vigoor wants nothing more than to rule over all as the one creator deity by devouring and destroying the current universe, so it may be reborn into a Fiendish universe under his rule.

In the beginning, the first deity Gurdu had form out of a great nothingness and began to give order and function to the universe.[2] However unknown to Gurdu existed an instinctual fear in a remote territory of chaos. As time passed this fear grew and took shape, evolving into hatred. Hatred would keep growing until it reached the level of a Deity. Thus the evil god; Vigoor, came into being.[3]

Vigoor, the ancestor of all Evil Deities, set the first conflict into motion as he started to devour the territories of Gurdu, beginning at its center. Chaos enveloped the world while Vigoor reshaped it, causing endless solar and lunar eclipses to occur, as the primitive earth shook and split, and the seas dried up only to flood into existence again. Intense winds swept over everything as evil flames burned down all of existence ignoring even the concept of time itself.[4]

In the chaos, Gurdu eventually lost strength and fell apart, breaking into quarters, each part becoming a new deity with Gurdu's characteristics of Sentiment, Wisdom, Creation and Immorality. These new Deities possessed little power as they were born into a panic state of being. However the Deity of Creation, Serpent, who had kept some semblance of sanity, gave birth to the seeds of life.

The seeds took root, maturing in the chaos to become the 13 Dragons. Once fully grown, the Dragons waged a long, hard and fierce war against Vigoor that would span over the aeons, until Dragons finally defeated Vigoor.[5] The world now found peace, watched over by the Dragons as the Deities descended from Gurdu reshaped the world. It was during this time the first spark of human life emerged in early human tribes.

Though Vigoor was defeated, he would manage to hold on to existence through the envy of the youngest Dragon. This allowed his influence to re-emerge over the ages in many forms, starting with the envy of the youngest Dragon, who would emerge as the Dark Dragon, bringing forth Vigoor's death and destruction the world. Then in form of his spawn, the Evil Deities and Archfiends such as Vazdah who rose from Vigoor's corpse. These Evil Deities would spawn the Fiends who draw their strength from Vigoor. His influence finally emerges within the Holy Vigoor Emperor, the disciple of Vigoor who would later be infused with Vigoor's essence (the powers of all the evil deities) upon unsealing the Dark Dragon Blade.

It has been foretold that when the world enters a state of total decadence, Vigoor would return in a blaze of all destroying flames, recreating the world into a fiendish universe under his tyrannical rule.[6]

Semi-Omniscience : Vigoor's influence is able to exist everywhere, but after his defeat by the Dragons his power is now limited to the lands of the Holy Vigoor Empire.

Omnipotence : Vigoor has unlimited power, able to warp reality, time and space in anyway he pleases. He was able to devour the world and defeated Gurdu, the creator. 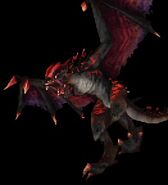