Volf, The Invincible Ruler of Storms (嵐のヴォルフ; Arashi no Volf; Volf of the Storms) and one of the Five Greater Fiends of Vazdah, was a vicious, four-armed warrior who seeks an opponent worthy of himself. He used to lead his Werewolf Lycanthrope underlings, until his defeat by Ryu Hayabusa.

In Mythic times the Greater Fiend Volf ruled over a region in modern day Europe, known as the Aqua Capital. As with many of the other Greater Fiends, Volf claimed an ancient tribe of humans for himself. This tribe would be known as the Lycanthropic Tribe who eagerly worshipped and served their Master Volf as they waged wars to enslave the human populace. Eventually Volf was defeated and sealed away in eternal slumber by the ancient Dragon Lineage.

In modern times, Volf's seal was broken by Elizébet and the Demon Statue, and the descendants of powerful Lycanthropes' bloodlines reawakened as well. He quickly regained control of his tribe and laid claim to the Eclipse Scythe; a weapon created from the sacrificed remains of an overthrown Lycanthrope King forged in Wootz steel, and bathed in the blood of countless human beings. Volf reestablished his rule of the Lycanthrope Castle, turning the Gothic castle into an evil fortress, and making sport out of hunting the human survivors. Volf grew bored with watching weak opponents, and ordered his Lycanthrope servants to seek out a worthy foe. He soon sensed the new Dragon Ninja, Ryu Hayabusa, and invited him to fight. Preparing the coliseum as a stage to battle the Dragon Ninja, and with his tribal weapon the Eclipse Scythe in hand, he advanced to kill Ryu in a duel to the death. Despite his incredible bestial rage and destructive power, Volf was defeated and Ryu claimed the Eclipse Scythe for himself.

Volf, later resurrected in Hell, no longer fought Ryu for fun, but in vengeance and to stop him before he could destroy the Archfiend. Volf attacked with an army of Fiend Centaurs and a makeshift bone-scythe to replace his lost Eclipse Scythe, but was defeated again, this time permanently as his body turned to stone and crumbled away, allowing Ryu to acquire the Heart of the Bestial Storms. 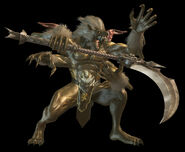 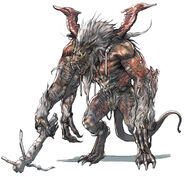 Volf as he appears as a boss in NG Clans