Werewolves are a sub-race of Fiends, transformed from humans into a wolf like creature. They serve the Greater Fiend Volf, living in a warrior-like society, preferring to fight and watch gladiator style battles, although they are also shown ravaging and devouring humans in raids.

A large humanoid wolf-like creature, standing on two legs, and usually hunched over. They are very bulky, featuring a large upper body, highly muscled torso and thick gorilla-like arms. There are two different ranks among the werewolves; a dark brown wolf and a stronger reddish wolf with bones protuding out of its forearm.

Brute Strength: Werewolves will use their raw strength to pulverize their enemies. They will also pick up corpses and chuck them at enemies.

Durability: Werewolves are durable and highly resistant to stagger, and can often shrug through attacks.

Charge: Although large and bulky, werewolves are surprisingly fast when running towards their opponents.

Pounce: Werewolves can jump from far distances, pouncing on any unsuspecting victim. Once caught in a pounce the werewolf will either bite on their prey and pound it to pulp.

Werewolves made their first appearance in Monastery level serving Ishtaros and Nicchae against Ryu Hayabusa. The Fiendish Sisters pulling together all their forces they could muster including those of other Fiend Tribes such as the werewolves. Although Ryu slays them, there are many more Werewolves bent on killing him throughout the game, including battles in the Nether Realms where the slain fiends get a second shot at Ryu, enhanced by the Nether Realm they dwelled in.

In Mythic times the Greater Fiend Volf ruled over a region in modern day Europe. As with many of the other Greater Fiends, Volf claimed an ancient tribe of humans for himself. This tribe would be known as the Lycanthropic Tribe who eagerly worshiped and served their Master Volf as they waged wars to enslave the human populace. Eventually Volf would be defeated and sealed away in eternal slumber by the ancient Dragon Linage, leaving his minions to internal strife. The ancient Kings of the Lycantrope Tribe fought savage battles for supremacy with the defeated falling victim to a cruel fate. The overthrown King would be thrown into a vat of Wootz steel, and later used to forge the Eclipse Scythe in a long, cruel, and gruesome process that required the sacrifice of many live humans.

For centuries the ruling class of the Aqua Capital resided in the Lycanthropes' Castle, idolizing werewolves in their statues and paintings, with few individuals realizing their full potential through the ages. It was only when Elizébet released Volf from his slumber that those of the Lycanthrope Tribe had their Lycanthropic Bloodline reawakened and became powerful werewolves. Volf quickly took up his throne in the Lycanthropes' Castle, transforming the Gothic castle into an evil fortress,and making sport of the non werewolf survivors. Easily bored Volf dispatched his army of werewolves unto the unsuspecting Aqua Capital below to find an opponent worthy of him. The werewolves raided the city in their beast like killer instinct, even killing members of the Black Spider Clan. They captured many humans, and feasted on them, throwing the bones into a pit below the castle. They were unstoppable, until the worlds most powerful ninja, Ryu Hayabusa following the trail of Elizébet and the Demon Statue, stepped into the city. 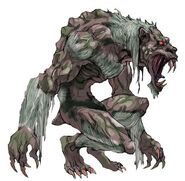 A group fo Werewolves gathered around their leader Volf
Community content is available under CC-BY-SA unless otherwise noted.
Advertisement