The Windmill Shuriken (風車手裏剣, Fūsha Shuriken?) is a large, foldable shuriken, used as a projectile weapon. It functions like a boomerang, returning to the user upon thrown. This is a weapon passed down through the Hayabusa ninja clan. It is also known as a Fūma Shuriken.

In Ninja Gaiden it can be found in the alley next to Han's Bar, considered as a reward for a challenge Ayane lays upon Ryu through a ninja scroll, in order to test Ryu's skills as a ninja. Must wall-run along the blue lines, use an aerial on the final jump to gain extra height in order to reach the platform where the Windmill Shuriken is.

In Ninja Gaiden Black, the Windmill Shuriken still is found in the same location on the Normal difficulty, but on higher difficulties it is rewarded by Muramasa upon finding 15 Golden Scarabs.

In Ninja Gaiden II it is found in Ryu's childhood friend Kureha's room during Chapter 11. This shuriken can be charged to release Ultimate Attacks:

"A large, unique Shuriken that has been handed down within the Hayabusa Clan for generations. Due to its large mass, the Windmill Shuriken is able to strike multiple enemies without losing momentum and return to the thrower like a boomerang. Its four blades can be folded on top of one another by rotating them on the central axis. It is carried in this folded state, attached to the wielder’s forearm guard. Some say that a similar weapon carried by the legendary Ninja Fuma Kotaro was inspired by this Hayabusa Clan original." -Ninja Gaiden II 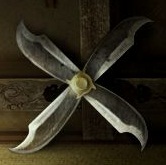 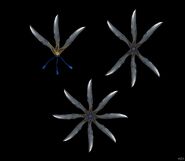