The Wooden Sword is a traditional bokken, a training sword used in Kenjutsu. It shares its move list with the Dragon Sword - though it is greatly limited, and lacking several moves. In addition, it is incapable of performing Essence/Ultimate Techniques, and cannot decapitate enemies; certain armored enemies also won't take damage from the wooden sword. This weapon can be upgraded 7 times.

When fully upgraded, the Wooden Sword's visual appearance changes to resemble an eku (an oar used for combat in Okinawan Kobudo) called Unlabored Flawlessness. This weapon shares some of its moveset with other heavy weapons, such as the War Hammer and the Dabilahro, but it is capable of performing aerial attacks and even the Izuna Drop.

The Unlabored Flawlessness also has a unique ability: its damage increases when the player is below 25% health, dealing 150% increased damage (200% if one has the least amount of health possible without dying); in addition, the characters imprinted on the back of the weapon begin to glow, signifying an increase in the weapon's power. Under these conditions, the weapon deals the most damage of any weapon in the game. If the player recovers health above 25%, however, the effect will cease.

Unlike the Dabilahro and the Warhammer, the Unlabored Flawlessness cannot destroy boulders and other obstacles.

"The true form of the Wooden Sword. Containing an ethereal sense of weight, its impact is incredibly powerful."

The Wooden sword can be bought from Muramasa at any point in the original Ninja Gaiden game, while in other versions it can be either bought or rewarded for collecting Golden Scarabs, depending on the difficulty settings. The Unlabored Flawlessness is obtained by fully upgrading the wooden sword. 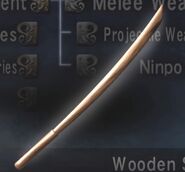 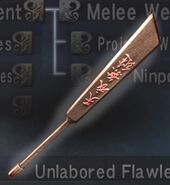