Described as a demon ninja, he is out for revenge against Ryu Hayabusa who killed him in an encounter.

Yaiba is a ninja who has been transformed into a cyborg by Forge Industries.

Yaiba wears a ragged, blue, hooded shinobi shozoku that is open in the chest area. Under his hood, Yaiba wears a face mask and has short and messy black hair and black eyes.

After becoming a cyborg he gained a mechanical left arm with the radical 風 (Kaze, or Wind), emblematic of the Kamikaze Ninja Clan, as a crest on the shoulder. The left side of his face also features a red, bionic eye.

Unlike other ninja who see death as honorable, Yaiba looks at such views with extreme disdain especially after he killed his sister Yuki in a fit of rage and witnessed his father's refusal to revive her with their village's Ninpo.

Despite being recruited to fight the zombies, he sees them only as practice for his vengeance against Ryu Hayabusa. Yaiba cares very little for his coworkers or the safety of the world, thinking only about Hayabusa and killing him.

When fighting enemies, Yaiba shows a sadistic streak, exemplified by his ripping off zombies' arms and beating them up with them, sometimes laughing maniacally while doing so.

Yaiba is a heavy drinker, always carrying around a sake bottle with him, even in battle and in the arcade version of the game went out of his way to get it back.

Despite being ruthless, barbaric, and seemingly amoral, Yaiba still maintains his ideas of right and wrong.

Hayabusa himself believed that Yaiba still had a possible redemption and good side to him, and indeed Yaiba strongly valued the life of his sister over their clan's values and halted Alarico del Gonzo's plans, despite no personal benefits to him for doing so.

Yaiba is a crazed shinobi who once belonged to the Kamikaze Ninja Clan.

However unlike most shinobi in his group, despite his supposed superior talents, he considered himself unappreciated and undervalued by his clan.[2]

During training, after failing to concentrate and perform Ninpo, his sister, Yuki, teased him for his weak Ninpo abilities and Yaiba lost his temper.

In his enraged state he critically injured her. Regretting the action immediately, he went to inform his father. As his father told him nothing could be done, Yaiba suggested using the village's Ninpo, known for being able to resurrect people, but his father rejected the idea as ninja were meant to die with honor.

Disregarding his fathers disapproval Yaiba went to the village safe house, getting through the illusions and retrieving the scroll. But upon coming back he found Yuki was beheaded by his father to prevent Yaiba from reviving her. Enraged, Yaiba quickly killed his father and the Kamikaze elders while bringing them back with the Ninpo to spite them.[2]

Exiled from his clan, Yaiba became a nomad, bouncing between various ninja clans, mercenary groups and crime syndicates throughout Japan and Southeast Asia, developing his unique fighting style.[3] Throughout this, he made a hobby of killing Ninja, which he despised.

Years later, Yaiba heard rumors of magic sword in Mount Osore, a volcano supposed to be the actual entrance to hell. Arriving at a demonic river of lava near the volcano, he found a woman being accosted by a group of ninja. Due to his hatred of other Ninja, he intervened, saving her.[4]

She introduced herself as Keiko, while Yaiba collected the fallen ninjas' tsuba. She informed Yaiba that the ninja he killed were from the Kamaitachi Ninja Clan, keepers of the Storm Temple atop the mountain. She also told Yaiba how the river represents the person's sins. Given that she saw a large bridge over it and Yaiba saw a flow of lava and death, Yaiba made her carry him across. [4]

While crossing she told him that she sought revenge for her brothers who were killed by a ninja who "bears the name of divine wind". Yaiba promised her that revenge it if she stuck with him.[4]

Arriving at the base of the mountain, Yaiba took her on his shoulders and climbed up, using the skills he learned living in his mountain village. Finally reaching the top they found a monk belonging to the Kamaitachi Ninja Clan named Gorou guarding the temple.[4]

Gorou used the Ninpo of the Shadow Clone on Yaiba, slashing him and instantly stitching the wound so Yaiba wouldn't know where the attack came from. Yaiba being used to illusions quickly deduced who the real Gorou was and mercilessly slaughtered him. He then went up to Keiko and kissed her before dropping to the ground with her (implying they may have had sex).

When they awoke, Keiko saw the collection Dragon Tsuba Yaiba carried and realized he was the murderer of her brothers. Yaiba proudly admitted it and scoffed at her revenge. Seeing the katana she had on her, he quickly realized that Keiko was a Hayabusa Ninja Clan kunoichi. Taking the Tempest Blade, the sword he coveted, he left Keiko on the mountain alone and heard her curse him as he descended, giving his new sword the name that Keiko called him;  "Heartless" (「無精」Mu-Sei in Japanese).[5]

Ryu Hayabusa, the famed Dragon Ninja of the Hayabusa Ninja Clan demanded the Tempest Blade from Yaiba, in keeping with his clan's tradition of safeguarding potentially dangerous relics.[3] Yaiba would not surrender the katana.

Fifteen dead Hayabusa Ninja later, he would go head-to-head with Ryu. At first it seemed like the two were evenly matched, but Ryu's superior intellect and self-control enabled him to best Yaiba, and with one deft stroke of the Dragon Sword, Yaiba was brought down, losing his left eye and arm as well as his life in the process.

After waking up from his death, Yaiba discovers parts of him replaced with cybernetic implants.

Escaping from the flying vehicle where he woke up, he falls into Ukraine territory in the midst of a Zombie outbreak. He is quickly being reprimanded for destroying his transport by Miss Monday, who introduces herself as the person who brought him back to life, thanks to her boss, Alarico del Gonzo, the head of Forge Industries.

While fighting against the encroaching zombies, Yaiba gets attacked by a Ukrainian military helicopter, sending him deeper into the nearly destroyed building.

Encountering zombified military personnel, Yaiba proceeds trough the ruined building encountering a Gunship, which he quickly takes down with its own rockets. Using the helicopter as a stepping stone, Yaiba heads trough more destroyed buildings and gets attacked by more zombies and Gunships until the building he's on collapsed from air raids perpetrated by the military.

It was at this point, after reaching the streets that Yaiba met Alarico del Gonzo, who threatened him with a killswitch installed into his power core if he were to not follow his orders. Yaiba attempts to kill Del Gonzo, but realizes he was only a hologram.

Del Gonzo informs Yaiba, that Ryu Hayabusa in the vicinity, trying to contain the outbreak and that he brought Yaiba back to life to have him kill Hayabusa. Yaiba immediately sets off to find him and kill him. Miss Monday informs him that Forge Industries had a Listening Station underneath a lingerie shop, where should have had information on Hayabusa's location. Yaiba heads trough the streets towards Kataev. Heading trough a church, Yaiba encounters a Zombified bride with electrical implants. Miss Monday disclaims having anything to do with her modifications.

Encountering no communication from the Listening Team, Miss Monday questions if they barricaded themselves after the infection hit. Arriving at the lingerie shop, Yaiba finds the place in lock-down, forcing him to destroy shop to get inside. Yaiba finds the place deserted except for zombies that had taken over.

Finding all the equipment intact, Monday deduces that they didn't evacuate since they had orders to destroy everything if they did. Heading further into the facility Yaiba encounters an RDU, which he promptly deactivates. He enters the command center, where he finds the Listening Team cut into pieces. He deduces that these men were killed by Hayabusa.

Monday said that the sewers adjacent lead to a research facility at the edge of town, the Lazarev Institute, where they had something called Compound 72, which she deduces had started the outbreak. Yaiba heads out, hoping to intercept Hayabusa and kill him.

Upon having finding and defeating Ryu Hayabusa for a third time, Yaiba nearly slew Ryu, until Momiji was caught in the fall out, forcing Ryu to save her. As Yaiba is ready to kill his rival, it is made clear that Ryu didn't care what Yaiba did to him.

Instead, as Ryu is about to die at the hands on Yaiba, the latter is given a notebook Ryu had found and told to give it the right people, imploring Yaiba to find whatever good was left in him.

Once Yaiba finds out that his revival to get revenge on Ryu was used by Del Gonzo in order to create the formula, in turn creating the zombie outbreak, was coming from a long dead alien life form, the source of which was inside the cave where they are currently were, Yaiba became enraged.

Throwing the book down into the abyss, Yaiba ripped out his core, severing Del Gonzo's control over him, sparring Ryu, who saved Momiji from death. With this, Ryu lends the task over of putting an end of Del Gonzo's scheme to Yaiba.

Upon his programming being revived by Miss Monday, she also defect Forge Industries, in order to stop Del Gonzo from becoming an ultimate lifeform.

After he's subsequent defeat of Del Gonzo, Yaiba and Monday conspired to use the cure as a money making tool before returning from the alternate dimension.

Prior to becoming a cyborg, Yaiba was feared by others for his skills, enough to be called a demon ninja.

His speed, agility, reflexes, and combat abilities were above the average ninja; enough to fight near equally with Ryu.

Following his rebirth as a cyborg, his abilities are enhanced, giving him an edge in combat. His bionic left arm alone is able to lift, hit, and crush with great force. The arm has the ability to shoot out his hand while attached to a chain in order to attack enemies from afar and reach higher areas.

Yaiba is also able to grab pieces of certain zombie types to use as improvised weapons, such as flamethrowers, nunchaku, scythe, or electric flails.

Using both his Ninja abilities and Cybernetic enhancements, Yaiba is able to use parts of his enemies as weapons. However these have limited uses. 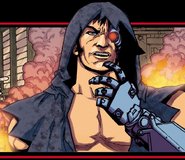 Yaiba as he appears in the Dark Horse Comic

Yaiba as he appears in Yaiba: Ninja Gaiden Z 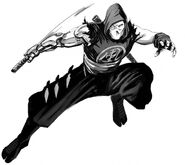 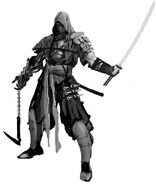