Zedonius, Ruler of Flame (炎のゼドニアス, Honoo no Zedonius?, Zedonius of the Flame) has nothing but contempt for human life, often addressing them as "apes" and "monkeys". He descends upon the capital of a once-great military superpower, threatening humanity with an ultimatum: submit to the will of the Fiends or die. Ryu must ascend the city's clock tower to put an end to his fearsome reign. According to Zedonius, it was he who bestowed the gift of fire upon humans centuries ago.

Zedonius is one of the Four Greater Fiends of Vazdah, and the Malevolent Ruler of the Flames. Many aeons ago, he and the other Greater Fiends were sealed into a deep sleep by the Dragons. Several millennia later he has been reawakened by Dagra Dai, and invades the former military super power Russia. There he gives the soldiers who aim their weapons at him an ultimatum; yield to the Fiends, or perish. The soldiers' attacks have no effect on him and he incinerates them with his hellish flames. Soon after he taunts the Dragon Clan's Super Ninja, Ryu Hayabusa into fighting him at the clock tower. Zedonius appears in the tower and proclaims himself the one who bestowed humanity with the gift of fire. Hayabusa draws his ancestral weapon, the Ryuken without hesitation and tells Zedonius that what he says doesn't matter. Zedonius fights the Dragon Ninja warrior with murderous rage, but is defeated and killed, consumed by flames he couldn't control. As Ryu says triumphantly "Righteous flames shall cleanse the Earth of your kind." Zedonius screams from the pain of being burned and blows up along with the tower. Reincarnated in the Underworld, Zedonius is encountered again, and boasts that in the hellish realm his powers are absolute, and attacks Hayabusa to ensure the ritual to break Vazdah's seal goes unhindered, but was no match for the might of the True Dragon Sword. Zedonius is truly destroyed this time as his body absorbed into the magma rivers of the Underworld. 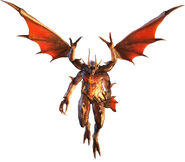 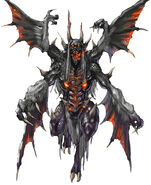 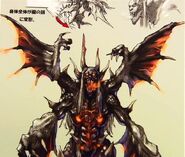 NG2: Zedonius artwork with concept sketches
Add a photo to this gallery

Retrieved from "https://ninjagaiden.fandom.com/wiki/Zedonius?oldid=20536"
Community content is available under CC-BY-SA unless otherwise noted.